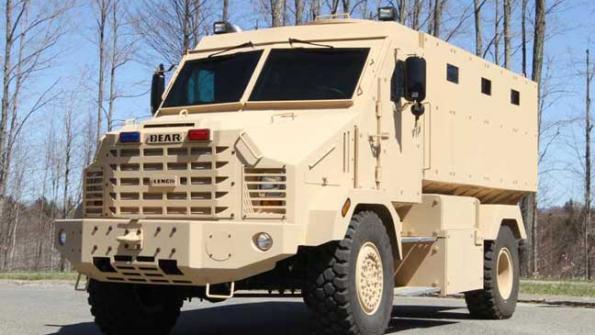 The Lenco BEAR Troop Transport Armored Vehicle has passed a series of blast tests that were conducted at the U.S. Army’s Aberdeen Test Center. The vehicle is used in law enforcement, homeland security and related applications.

The BEAR Troop Transport Armored Vehicle has passed a series of underbody and side blast tests that were conducted at the U.S. Army’s Aberdeen Test Center. Pittsfield, Mass.-based Lenco Industries produces the BEAR unit, which holds 17 people. The vehicle is designed for military and government personnel and international security forces that operate in hostile environments.

U.S. government convoys and diplomatic security details use the vehicle overseas in hostile areas. In addition to the vehicle’s armor protection, key survivability features include blast seats, full fire suppression capabilities and run-flat tires. A variety of communications and intelligence sensors for the unit are also available based on customer requirements.

“Improvised explosive devices continue to be one of the most pressing concerns for military operatives and overseas diplomatic transport,” explains Lenco Vice President, Len Light. “And we’re proud to provide a blast-resistant vehicle that has proven to outperform its military counterparts in protection and survivability.”

The video shows the effective use of the Lenco BearCat vehicle at a recent Ottawa, Ontario, Canada post office shooting incident.