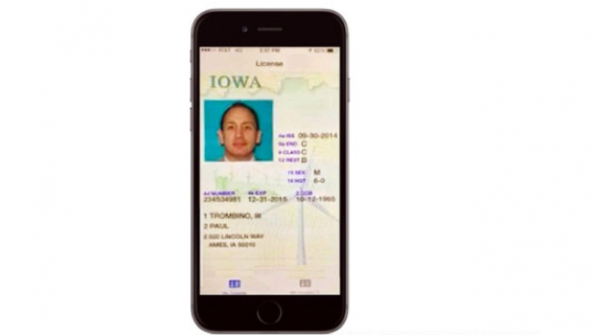 Iowans will soon be able to use their smartphones to identify themselves, bypassing the need for physical ID cards.

Iowans may soon be going electronic with their identification. The state department of transportation plans to issue a mobile app drivers can use as their official licenses – the first such program in the country.

The app will be provided to drivers in addition to a physical ID at no additional cost, according to the Des Moines Register. Different departments foresee differing timelines for the app’s rollout, but it is expected to be available sometime next year or in early 2016.

"We are really moving forward on this," DOT Director Paul Trombino told Gov. Terry Branstad during a state agency budget hearing, according to the paper.

While the smart phone licenses may be convenient, there are several hurdles to clear before a digital license will get state approval, according to Tech Times. For one, the app will need to be secure to avoid identity theft, and law enforcement and vendors of tobacco and alcohol will need to learn the new system to verify customers’ ages.

But the Department of Transportation is confident security will not be an issue. The new digital licenses, which Trombino described as “an identity vault app,” will be accepted by Iowa law enforcement during traffic stops as well as by security officers screening at local airports, the Des Moines Register reports.

However, some law enforcement agencies are worried the digital drivers licenses may cause problems, particularly with regard to handling resident’s smart phones, according to Siouxland News, a local TV station.   “I hate having the responsibility of having somebody's possibly $1,500 cell phone and having to replace that if it gets lost or damaged while it's in my possession," Lt. Charlie Hertz of the Woodbury County, Iowa, Sheriff's Office, told the TV station.

But the Department of Transportation says it won’t be necessary for law enforcement officials to hold a driver’s phone. "One of the things we really anticipate happening is there will never be a need for the phone to leave the hands of the user.” Andrea Henry, director of strategic communications for the Department of Transportation, told Siouxland News. She says current technology would allow officers to scan an individual's phone without ever having to touch it.

Additioanlly, Siouxland News reports the use of a digital license would be completely voluntary, and drivers could continue to use traditional physical licenses if they choose.