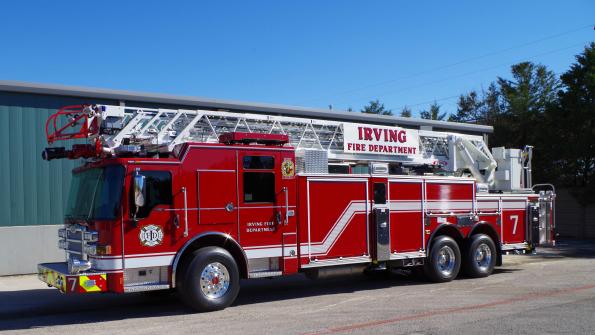 Pierce Manufacturing has sold the Dash CF fire chassis to six fire departments within the Dallas-Fort Worth Metroplex within the past 18 months.

The Irving Fire Department in Irving, Texas, has taken delivery on three Pierce Dash CF pumpers and a Dash CF 105-foot heavy-duty ladder apparatus. Pierce Manufacturing has sold the Dash CF chassis to six fire departments within the Dallas-Fort Worth Metroplex within the past 18 months.

The Irving Fire Department, which placed three Pierce Dash CF pumpers with PUC pumps into service in October, is taking delivery of a Dash CF 105-foot heavy-duty ladder this month.

“Historically, the complaint has been that there’s not enough room for the driver and officer in the cab. The Dash CF has changed that and it’s one of the important reasons we went with it,” said Irving Fire Department Assistant Fire Chief Tony Harvey. “The Dash CF sits lower and is very maneuverable. We have a lot of apartment buildings in Irving and our firefighters were having trouble getting into tight areas. The compactness and agility of the Dash CF is a big plus.”

Irving Fire Department’s new Pierce Dash CF 105-foot aerial ladder is a straight stick configuration that is able to carry a sizable amount of tools and rescue equipment. “On all of our Dash CF apparatus, there’s plenty of compartment space,” said Assistant Fire Chief Harvey. “In fact, we’ve got room to spare. Everything has a place, so it’s there when our firefighters need it. Being able to carry all of the equipment we need helps us to be more effective and responsive.”

“The Pierce Dash CF is cultivating a loyal following among fire departments across the U.S.,” said Jim Johnson, Oshkosh Corporation executive vice president and president, Fire & Emergency. He listed some of the Dash CF’s plusses, including plenty of cab room and ergonomics, ride quality, and safety features.