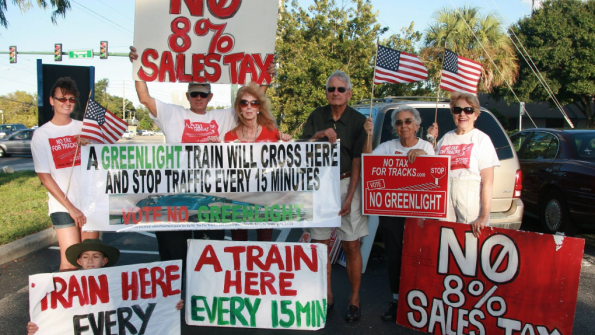 Some voters are opposing new rail transit systems, saying light rails and street cars will cause more problems than they will solve.

Despite oft-heard cries for solutions to transit woes, voters in two counties voted against implementing light rails or streetcars to solve transit problems.

Last month, Pinellas County, Fla., voters said no to Greenlight Pinellas, a 24-mile light rail system and expansion to bus services, according to the National Association of Counties (NACo).

The project failed with 62 percent of voters opposing the one percent sales tax increase it would have taken to finance the system, according to local CBS affiliate News 10. Despite being the most densely populated county in the Tampa Bay area, Pinellas has often had difficulties gaining financial and political support for mass transit projects, the TV station reports.

Opponents argued that the resulting 8 percent sales tax rate would be the highest in Florida’s 67 counties, and would unfairly burden the county’s poor, elderly and disabled. No Tax For Tracks, the main group opposing Greenlight Pinellas, argued that light rails do not reduce congestion and would not spur economic growth in the county.

Greenlight campaign co-chair Chris Steinocher told News 10 he fears voters may have favored politics over reason. “I really believe that people may have followed ideologies [of] no tax, no tax, no tax,” he said.

Despite the defeat, at least one county leader still feels that some derivative of the Greenlight project may still be salvaged. “The voters sent us a clear message that this was not the right plan for Pinellas at this time,” Kenneth Welch, a county commission member who also chairs the county’s transit authority, told NACo. “What I heard throughout this process is ‘we like the bus portion of the plan’… they are not quite sold on rail and how rail fits into Pinellas County.”

Arlington County, Va., too, recently canceled its plans to construct a $500 million streetcar system after the overwhelmingly Democratic county of 225,000 residents reelected an Independent county board member who made his opposition to the streetcar his main platform, NACo reports.

County Board Chairman Jay Fisette said that while he still supported the concept, the local government did not adequately convince residents  of the streecar’s importance.

“We did not effectively make the case to our community. We needed to communicate more clearly how a streetcar system would benefit our entire community and how we could pay for it without diverting funds from other priorities, such as schools,” he told NACo. “We were unable to persuade a majority of voters that a streetcar system is Arlington’s next generation of transit, and that we can afford to build it.”

However, some municipalities are saying yes to rail-based transit. Atlanta has begun to run tests on its streetcar, and nearby Clayton County recently OKed the expansion of Atlanta’s mass transit system, MARTA, into its limits.