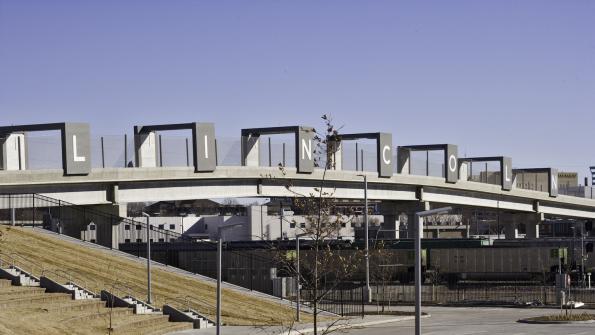 The city of Lincoln is home to the nationally recognized University of Nebraska football team. With a desire to leverage televised football events, the city was seeking a memorable and visible representation of the city with this project. The ability to generate aerial views of this artistic expression of the city was a must.

Conceived, designed and built by Kansas City company Dimensional Innovations (DI), the 611-foot-long bridge spells “Lincoln” from the sides and top views. It connects Pinnacle Bank Arena with parking areas in Haymarket Park. The 18 foot-tall letters appear on the sides and top of the bridge. Associated with each letter is a corresponding value or principle. DI used quotes from Nebraskans – famous, historic or living – to celebrate the city’s rich cultural history. For instance, the letter “i” in Lincoln has a quote associated with integrity.

The bridge letters include 43 tons of steel, use 6,000 LED lights and serve as a centerpiece to a restored part of Lincoln. While many see a pedestrian bridge as simply utilitarian, the city uses this structure to connect and inspire its citizens.

“When you look at this design more closely, it is truly a piece of art,” said Lincoln Mayor, Chris Beutler.

During the day, the sun illuminates the bridge letters and by night, they light the bridge, turning an otherwise large steel structure into a beautiful landmark that is used by nearly 5,000 people during sell-out weekends.

As DI Chief Brand Officer Brett Posten put it, “The ability to help the city of Lincoln to create an iconic monument that will endure for generations was a true honor for us. In a time when civic design and construction can be uninspiring and disposable, projects like this are important. Being a citizen of Nebraska means something and this bridge brings that to life.”

For more images of this remarkable bridge, visit our gallery here.