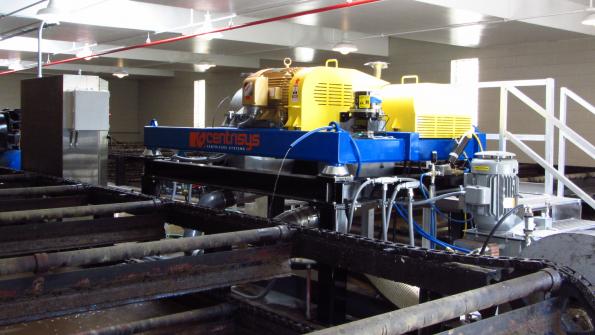 In August 2011, Kenosha, Wis., contemplated a difficult choice regarding its wastewater treatment plant on the shores of Lake Michigan. The plant was using an aging Dissolved Air Floatation Thickening (DAF) system featuring a variety of pumps and aeration equipment that needed to be replaced or retired. Facing costs of $80,000 to $100,000 for upgrades to the existing system, officials began to explore new technologies for the Kenosha Water Utility.

That’s when Michael Kopper, president of Centrisys Corporation, approached Kenosha officials about a new thickening centrifuge his company’s engineers were developing that would thicken sludge without the use of chemicals, as well as increase digesting capacity. Kenosha worked with the company previously with its first installation at the plant. Centrisys’ CS21-4HC centrifuge for biosolids dewatering had saved the utility $420,000 in chemical and operational costs in its first year.

The city decided to install the new THK 200 centrifuge. “We felt as if the new centrifuge offered process flexibility, especially the thicker level of cake solids required for energy-efficient designs. We were aware of other thickening technologies that were available, but they all required expensive chemicals derived from non-renewable petroleum resources,” says Kenosha Water Utility General Manager Edward St. Peter.

In nearly three years of operation, the THK centrifuge continues to provide increased efficiency for the city. THK thickens the sludge to 5 to 6 percent solids, whereas the original system only produced 3 to 4 percent. With the needed upgrades to the plant’s pumps, there is the potential to thicken to 7 percent solids. The system also provides a measurably smaller footprint than the plant’s original system, requiring about 1,000 square feet of space in contrast to the 10,000 square feet originally required by the DAF system.

The THK has also increased environmental efficiency for the plant. The new system’s power consumption is about 50 percent less than the original DAF system’s needs. Additionally, improved digester operations allow for more methane gas to be produced organically for on-site heating use.
“After the THK was in a short while, I really gained confidence in it. We’ve got enough runtime on the machine now, and overall, it’s been very reliable. It’s been running 24/7, and it’s trouble free,” says Dave Lewis, assistant general manager of the Kenosha Water Utility.