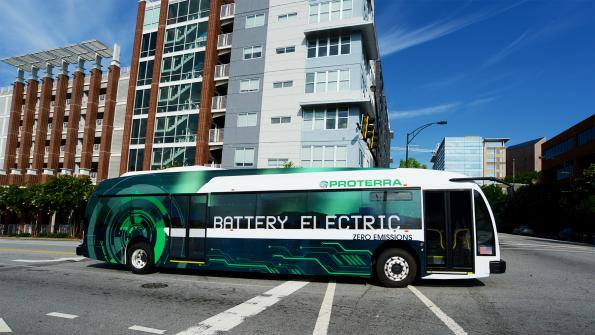 The King County Metro public transit authority in Seattle has purchased two EV (electric vehicle) buses with an option to buy 200 more over next five years. Greenville, S.C.-based Proterra is providing the vehicles.

Following a one-year trial period, the agency has the pre-arranged option to purchase up to 200 more buses and additional fast charge systems, depending on the outcome of the demonstration. Proterra was selected through a competitive process for the program, which included bids from other transit vehicle manufacturers.

The agency has embraced clean technology for transit. King County Metro’s fleet currently incorporates electric trolley and diesel-hybrid vehicles. The ability to test and deploy more EV buses may allow the agency to meet its goal of moving toward an all-electric and hybrid-electric fleet.

Popple said the EV bus transaction should have a positive impact on the Seattle area. “King County Metro’s willingness to adopt EV buses as a means to reduce emissions and fuel costs will help other agencies understand and perfect the deployment of EV transit vehicles.”

Funding for the zero-emission electric buses and fast charge system, which are scheduled to be delivered in the first half of 2015, will be provided by FTA TIGGER funding and matching funds from King County.

With this purchase, the Seattle area is the latest in a group of metropolitan areas to purchase and deploy Proterra EV transit technology. Those areas include Stockton and Pomona, Calif.; San Antonio, Texas; Worcester, Mass.; Tallahassee, Fla.; Seneca, S.C.; Nashville, Tenn.; Reno, Nev.; and Louisville, Ky.

Proterra EV buses have logged nearly 500,000 road miles, powered 100 percent by clean local electricity. The company’s buses offer a limitless operating range. The vehicles are fast-charge-enabled, so they are suited for transit routes.

In the video, watch the Proterra 100 percent electric bus take off on a test drive from the SEPTA’s headquarters in Philadelphia.