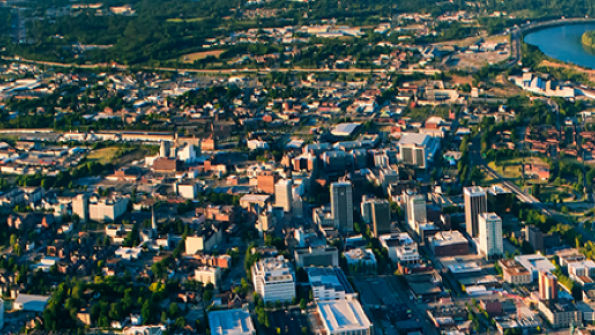 Innovation and its challenges

Mayors discuss the issues that arise when dealing in the “innovation economy.”

Technology is driving urban economies, but these advancements bring with them challenges. At Politico magazine’s “What Works: Boston” event, Boston Mayor Marty Walsh and Chattanooga, Tenn., Mayor Andy Berke discussed the “innovation economy,” and the progress and problems that arise from modernization.

During the Oct. 10 discussion, Burke hailed Chattanooga’s high-speed Internet project, Gig City, as being the “fastest, cheapest, most pervasive Internet in the Western Hemisphere," Politico reports. Due to this infrastructure upgrade, Chattanooga is on the cutting edge, technologically speaking.

The New York Times reports Chattanooga residents pay less than $70 a month for ultra-high-speed fiber optic internet speeds, which delver a gigabyte of data per second. This is 50 times faster the average speed for homes in the rest of the country.

These high speeds have attracted tech and manufacturing startups to the city. According to program materials, Chattanooga is home to Gigtank, the nation’s first 3D printing/additive manufacturing startup accelerator. The incubator is currently home to about a dozen startup companies.

Boston, too, has had its share of tech successes. The Boston Globe reports that since the Cambridge Innovation Center was founded in Kendall Square, the city has seen its technology industry thrive.

According to program materials, the Cambridge Innovation Center is home to more startups than anywhere else on the planet and offers attractive amenities for tech companies.

The tech boom has helped lead to a Boston renaissance of sorts, according to The Boston Globe. For the first time in decades, Boston’s neighborhoods —not just the downtown core — are benefiting from redevelopment.

However, one of the drawbacks to advancements in the tech economy is a slow decline of affordable housing. Politico reports both mayors agreed they can’t wait on the federal government to help them confront this issue.

“I don’t think we can depend on the federal government at this point,” Walsh said during the discussion. Instead, he discussed his new housing plan that will invest $21 billion to construct 53,000 affordable housing units by 2030, according to Politico.

Berke agreed, saying cities shouldn’t rely on the federal government to solve their problems. “We can’t wait around,” he said.

To hear more from the mayors and panelists, watch the video below.