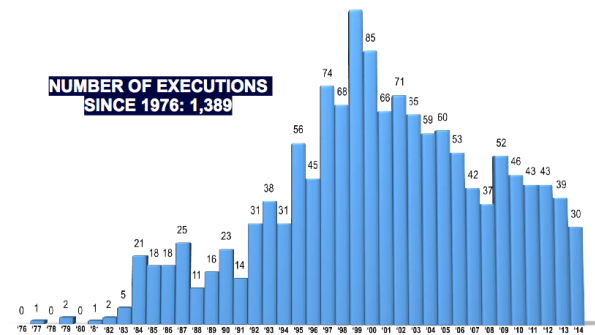 Harris County, Texas, executes most inmates in the country

For several reasons Texas - Harris County, in particular - executes a disproportionate amount of its inmates.

Ten counties are responsible for more than a quarter of all U.S. executions, but one Texas county in particular – Harris – surpasses all others on the list.

Harris County, which includes Houston, is the leader in executions carried out since 1976, when the congressional moratorium on capital punishment was lifted. CityLab reports Harris has carried out 122 executions since that time, more than double the next highest – Dallas County – which has carried out 53.

There have been a total of 1,389 executions since 1976, according to the Death Penalty Information Center. These executions were carried out in 32 states, as the remaining 18 states do not have the death penalty.

However, CityLab reports only a small percentage of counties are responsible for these executions; 85 percent of all counties have not executed an inmate in the last 40 years. This raises the question, why are these figures so disproportionate?

Some reasons are apparent. Population numbers play a part. With over 4 million people, Harris is one of the largest counties in the country, making it more likely to have higher numbers of violent crimes than smaller counterparts. CityLab reports resources and manpower also factor in.

“If you're in Houston, there are 200 attorneys in the D.A.'s office, at least.” Richard Dieter, executive director of the Death Penalty Information Center, told CityLab. “They can do a lot of death-penalty cases."

But more nuanced political also factors in. According to Dieter, during his 21-year career, one Harris County District Attorney, Johnny Holmes, presided over more than 200 death-row sentences, due in part to a “tough on crime” persona he was trying to cultivate.

Brent Newton, a professor at the University of Houston Law Center wrote a frequently cited article in the 90s attempting to explain why Texas executes so many people, Business Insider reports, and the “tough on crime” stance is an important factor. Unlike many other states, judges must run for office in Texas, and, to be elected or reelected, they cannot be perceived as “soft,” Newton wrote.

Another reason, according to Newton, is that until recently Texas had no public defender system in place. Until 2001, death row inmates who could not afford their own lawyers relied on outsourced counsel who were generally unfamiliar with capital cases. With the outsourced counsel, many defendants were sentenced to death rather than having charges reduced to life in prison.

For context, according to data from the Death Penalty Information Center, the top 10 counties that carried out the most executions since 1976 are: