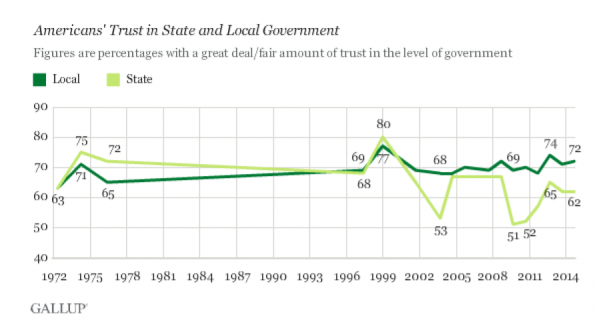 Continuing a trend of more than a decade, in 2014 Americans continued to trust their local governments more than their state governments.

According to a Gallup poll, 72 percent of Americans have high levels of trust in their local governments, while 62 percent have high levels of trust in their state governments. These figures are relatively unchanged from last year, and are off only a few percentage points from historical averages. Gallup reports that since 2001 local government has consistently been trusted more than state. The record low for local government trust (63 percent) occurred in 1972, and a record high (77 percent) was achieved in 1998, amid the national economic boom.

Gallup found that Republicans are more likely to trust state governments than Democrats and Independents – 73 percent compared to 59 percent. Since 1997 Republicans have typically expressed more confidence in state government than their counterparts in other parties, with exceptions in 2005 and 2010 when they tied with Democrats. Partisan disparities have grown wider in the recent years, however.

These results were based on telephone interviews conducted Sept. 4-7, 2014 with a random sample of 1,017 adults living in all 50 states and Washington D.C., according to Gallup.