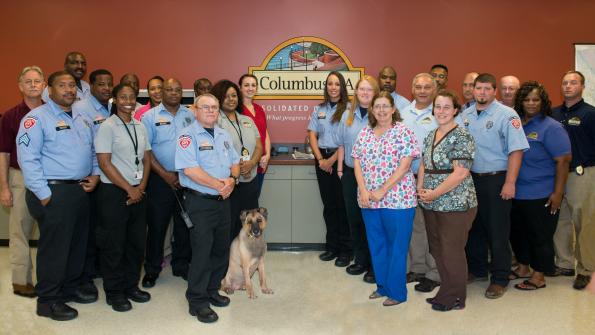 When former Public Works Director, R. W. “Dick” McKee assigned the Columbus, Ga., Animal Care and Control Center the mantra: “If it was easy, anybody could do it,” center workers took the slogan as a challenge to combat the city’s high euthanasia rates. And while Columbus continues to struggle to find forever homes for stray animals, a series of municipal initiatives is proving successful for the center, the city and all manner of four-legged friends.

For years, the Animal Care and Control Center battled high euthanasia rates, low live-release rates and the negative public perception of being a “high-kill” shelter. To combat these issues, a number of programs were implemented through the Save-A-Pet Program of 2011. The Save-A-Pet Program is comprised of eight points used in the No Kill Equation:

The programs produced from implementing the eight points have achieved astonishing results, including reducing the euthanasia rates from 79 percent in 2010 to 38 percent in 2013. In March 2014, rates reached an all-time low of 19 percent.

The programs produced include the development of a 130-strong volunteer group. These volunteers (60 of whom are “regulars”) assist at the shelter, serving as walkers or nurturers, providing data-entry services or offering professional photography to build a positive social media showcase of the center’s furry friends. Volunteers also assist with Off-Site Adoption Events, which are held every weekend throughout the community. Since the inception of the volunteer program, workers have hosted over 110 off-site adoption events in which 405 animals were either adopted or rescued.

Patricia Biegler, director of Public Works, says, “These events are set up to assist in exposing our adoptable animals to people who would generally not come into the shelter looking for a pet.”

And that’s the focus of most of the no-kill initiatives – to get the cute critters in front of folks who could provide forever homes. Drale Short, special enforcement division manager for the center, says that, whether through off-site-adoptions or running dogs in marathons, “We fully realize that to achieve our goals is a matter of exposing these animals to as many people as possible, thereby creating a favorable climate where they are not only seen but also allowed to interact with – and hopefully bond with – their potential new owners.”

Essential to this exposure campaign has been another jewel in the center crown – rescue outreach. Biegler says Short has worked hard, cultivating relationships with dozens of local and breed-specific rescues that previously “would have absolutely nothing to do with Animal Care and Control.” Establishing these community relationships has allowed for over 4,367 animals to be placed with local rescues from 2012 – 2014.

Short says partnerships have cut down on redundant serves and, therefore, costs. “Since the inception of this program the number of rescue groups [we’ve] partnered with has increased from one, our single public/private partner PAWS Humane, Inc., to our current total of 30. The cultivation of these relationships is one that is done on a daily basis and has proven to be one of the major keys to success for this program.”

In September 2013, Columbus Animal Care and Control was awarded a $58,250 Pet Smart Charities grant to implement a TNR program, which has contributed to the consistent reduction of cats being euthanized. In July, the facility was ranked as the number one mid-size municipal animal shelter by Best Friends Animal Society. This recognition helped secure a $500,000 Community Cat Grant to continue the TNR Program.

Columbus Animal Care and Control credits its volunteers and the citizens of Columbus for the successes. By recognizing that pet overpopulation is not a municipal problem, but rather a community problem that takes a collective community effort to resolve, the center has not only addressed a long-standing issue, but also built bridges in the community between private agencies, non-profit agencies, limited admissions shelters and open admission shelters as well as government and the general public.