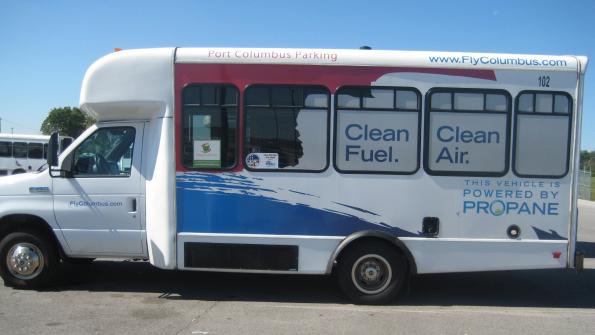 In 2009, the airport tested its first propane autogas shuttle, a Ford F-450 cutaway. Port Columbus liked the performance and placed an order for four more the following year. As of February 2014, the airport operates its entire fleet of passenger parking shuttles – 25 cutaways converted with ICOM equipment – on propane autogas.

“The primary reasons we chose the fuel were its clean, green aspect, and that it fit into our existing sustainability plan. We also looked for vehicles that could be converted relatively quickly and could be maintained easily. Propane autogas had everything we were looking for,” Swackhamer says.

Port Columbus also tested other alt-fuel vehicles, including a ULSD bus, but they all had challenges and ultimately weren’t a fit for the airport.

“We tested an ultra-low sulfur diesel bus with a new filter and it clogged up the exhaust system,” Swackhamer says. “Because we don’t drive at a great enough speed, the engine doesn’t get hot enough to burn off the particulate matter, so diesel wasn’t a fit for our operations.”

Port Columbus pays less than $2 per gallon for propane autogas, when compared with $3 to $4 per gallon for diesel. Fuel savings with propane autogas allowed the airport to recoup its upfront costs on all 19 conversions that occurred in 2013. After applying current fuel savings toward conversions, Swackhamer says the airport saved an additional $5,000 in 2013 with the propane-autogas-powered shuttle buses. Still, the airport sees some of its biggest cost savings in maintenance.

“There aren’t that many airports running a 100 percent propane-autogas-powered fleet to my knowledge,” Swackhamer says.  “When I get asked the question about how it’s performing and our experience, I tell them we’re satisfied with propane autogas and we don’t regret our decision at all.”