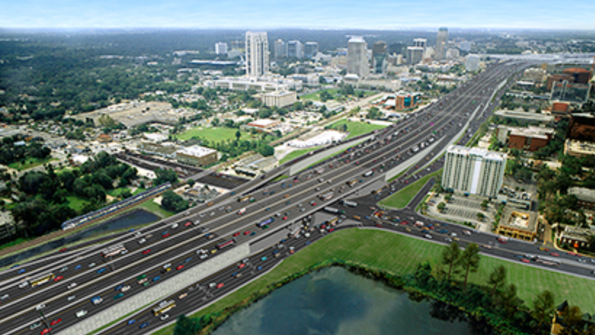 Public-private partnership to rebuild I-4 near Orlando

The Florida Department of Transportation (FDOT) finalized a $2.3 billion deal with a consortium of construction and infrastructure firms to rebuild Interstate Four in urban Orlando. The highway will feature improved aesthetics and toll roads.

The Florida Department of Transportation (FDOT) finalized a $2.3 billion deal with a consortium of construction and infrastructure firms to rebuild Interstate Four in urban Orlando. The highway will feature improved aesthetics and toll roads.

The I-4 Ultimate Improvement Project will “completely reconstruct” 21 miles of I-4 from west of Kirkman Road in Orange County to east of State Road 434 in Seminole County. The goal is for the highway to become a “signature corridor” with improved aesthetics and landscaping to provide a “Florida experience.” Four variable tolled express lanes (with rates set by FDOT based on traffic volume) will be added to I-4, while the free general-use lanes will be maintained.

To implement the project, FDOT entered into a partnership with I-4 Mobility Partners, a consortium that includes construction companies like Skansa and Granite and design firms like HDR and Jacobs. I-4 Mobility Partners was able to provide “significant technical enhancements,” including directly connecting express lanes to State Route 408 and adding auxiliary lanes and an additional pedestrian bridge. The project will include extensive bridge repairs and replacements.

Due to inflation and increasing fuel efficiency reducing gas-tax revenue, FDOT only had half the necessary funds in 2014. To pay for the project, FDOT and I-4 Mobility Partners worked with various lenders, including a consortium of six commercial banks and, via the Transportation Infrastructure Finance and Innovation Act’s (TIFIA) credit assistance program, the Federal Highway Administration. This reduced the cost by $68.7 million compared to I-4 Mobility Partners’ initial proposal. I-4 Mobility Partners invested $104 million, while commercial banks and TIFIA are lending $486 million and $949 million respectively. This is the largest loan the TIFIA program has ever made.

“This is a monumental milestone for one of the most congested corridors of the state, which draws millions of tourists and is an important mid-point in Florida for commerce and commuters,” said FDOT Secretary Ananth Prasad. “The project gives us the opportunity to show how a successful public-private partnership works, through construction and beyond, benefitting those who count on great infrastructure, which feeds a robust economy.”

Construction is slated to begin in early 2015 and is expected to take six and a half years. The Florida Department of Transportation has provided information on how to avoid the increased traffic, including alternate car routes and train and bus routes.