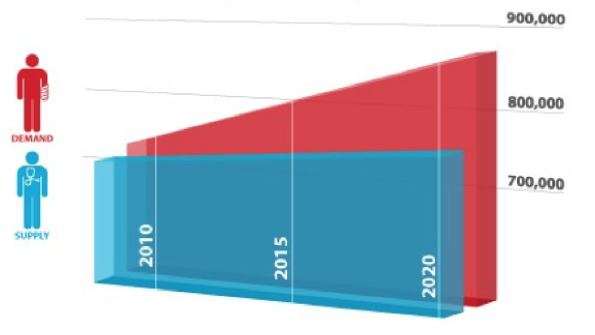 A looming shortage of doctors could threaten the healthcare systems of American cities.

The increased demand for doctors generated by the Affordable Care Act coupled with a rapidly aging population may put cities’ healthcare systems at risk of collapse.

According to the Association of American Medical Colleges, the United States could be facing a shortage of nearly 130,000 medical doctors by 2025. Last year, a CNN report cautioned that these shortages could threaten the entire healthcare system.

Using U.S. Census data, Better Doctor, an online heath and wellness news source, compiled a list of the cities which will be most and least impacted by the shortage of doctors by the year 2020. They are:

The ten least impacted cities will be:

CNN reports that the Affordable Care Act has attempted to address the issue. $1.5 billion has been allotted for the National Health Services Corps, which gives financial support to health care professionals in exchange for their services in areas in need, particularly those in rural America.

The Act also allocated money for additional scholarships for those in the medical field, and offers a 10 percent bonus to primary care doctors who agree to see Medicare patients through 2015, CNN reports.