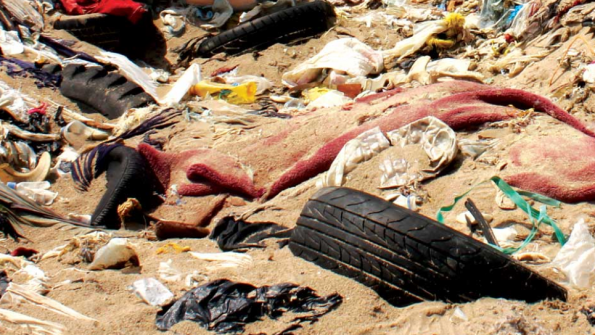 As part of Climate Diplomacy Day, the British and German Consulates General sponsored a public screening and discussion of the award-winning documentary 'Trashed' at Georgia Tech in Atlanta.

As part of Climate Diplomacy Day, the British and German Consulates General sponsored a public screening and discussion of the documentary Trashed, which was followed by a panel discussion with sustainability experts at Georgia Tech in Atlanta. The event was part of a global discussion on climate issues in 20 different countries.

Written and directed by Jeremy Irons, Trashed explores how everyday products are created, consumed and thrown away, and how this process impacts the environment, climate and human health.

According to the film, people are producing more waste now than any time in human history, and, unlike the waste we’ve produced in the past century, it includes toxic and long-lasting radioactive elements, heavy metals, poisonous solvents and other dangerous materials.

Those toxic materials create problems with disposal – particularly with the two forms of disposal most common around the world: burial and incineration. “We’ve reached a tipping point,” Irons says in the film. He argues that everyone, from individuals to governments, must take responsibility for the waste it produces and to start thinking of creative ways to deal with the problem.

Local government plays an important role in this solution. In the film, Irons highlights San Francisco’s Zero Waste Initiative as an example of what he says all municipalities should emulate. By 2020, the Zero Waste Initiative’s goal is to eliminate landfilling or incineration in the city by increasing access to recycling and composting programs.

After the film, the panel highlighted two major ways local government can play a role in reducing waste – regulation and community outreach.

The panel, left to right are: Marc Merlin, director of the Atlanta Science Tavern; Olivia and Carter Ries, founders of One More Generation (and their father, to their right); John Gardner, vice president and chief sustainability officer for Novelis; Lea Chambers, global marketing leader for Golder Associates; and David Bucknall, a Georgia Tech Professior in the School of Materials Science and Engineering. Photo by Derek Prall/American City & County.

Similar to smoking bans, seatbelt laws and other public health initiatives, local government can impose regulations on unhealthy or unsafe practices. This can include reducing harmful manufacturing processes or by regulating the way residents sort, separate and dispose of their waste.

Local governments can also use community outreach and education to decrease the volume of the waste stream. By empowering grassroots efforts, municipal leaders can create positive change in their local and global community.

Watch the video below to hear panelist Lea Chambers, the global marketing leader for Golder Associates, speak on how local government can help reduce waste and increase sustainability.