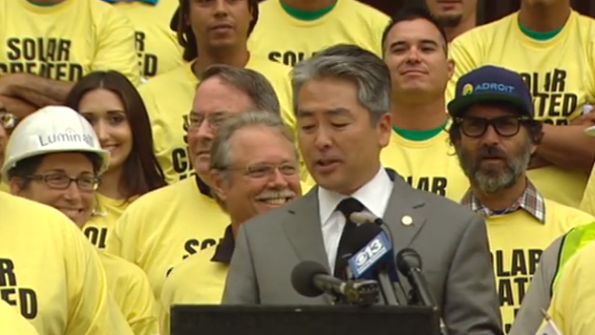 The measure, called the Solar Permitting Efficiency Act, passed the state legislature late last month. According to The Los Angeles Times, the new law would streamline permitting process, and help those looking to switch to solar save money.

Assemblymember Al Muratsuchi, the author of the bill, told the paper the bureaucratic permitting processes to install solar panels is prohibitive. “They told me that it often takes 65 days to install solar panels on a person’s home, of which 64 of those days are spent wading through the local bureaucracy to get the necessary permits and approvals.”

Costs of equipment have declined due to efficiencies in manufacturing, but Bernadette Del Chiaro, the California Solar Energy Industries Association’s executive director, said the costs associated with permitting and approval have remained about the same and keeping many residents from adding solar panels to their homes.

“Your typical home solar energy system has become practically cookie-cutter,” she said in a statement. “We’re talking about the exact same product, design and installation, yet many building departments require Byzantine permits.”

Currently the codes and regulations throughout the state’s 500 jurisdictions regulating the installation of solar panels have no uniformity, according to The Los Angeles Times. The bill aims to create a unified code.

Muratsuchi says the measure will also create jobs in the state, while working to achieve clean energy goals. “AB 2188, the Solar Permitting Efficiency Act, will create more solar jobs, contribute to California’s clean energy goals, and save homeowners money on their electricity bills…” he said in a statement. “California businesses, residents and our environment will all benefit from a streamlined permitting process that eliminates confusion and unduly costs.”

The bill passed the state senate on a 22-1 vote and cleared the assembly 66-1. It’s now headed for Governor Jerry Brown’s desk, according to The Los Angeles Times.

Watch Muratsuchi’s remarks along with statements from other solar industry leaders during Solar Lobby Day below.