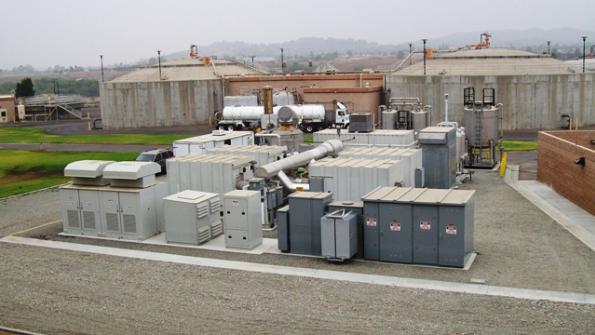 Sandra Curtin of the Breakthrough Technologies Institute offers examples of municipalities that have installed fuel cells to generate power at their wastewater treatment facilities.

A dozen California localities have installed fuel cells to generate power at their wastewater treatment facilities. The technology’s high efficiency, low emissions, reliability and cost savings spurred the installation. Fuel cells can operate using anaerobic digester gas produced in the treatment facility. The gas is a byproduct of the wastewater treatment process that is typically flared into the atmosphere. The state of California supports low-to-zero emission fuel cell power generation with generous funding incentives.

Tulare, Calif., for example, installed four fuel cells at its wastewater treatment plant to provide 1.2 megawatts of power. Total cost of the installation was $9.39 million, with about half funded through California’s Self-Generation Incentive Program (SGIP). Treatment plant operators report that the fuel cells save an average of $3,500 per day in electricity costs. In addition, an estimated one-time cost of $600,000 was avoided in Emission Reduction Credits (ERCs) that would have been required for combustion technologies.

Fuel cells can also generate power and byproduct heat for buildings using natural gas. The Sonoma County (Calif.) government installed a 1.4- megawatt fuel cell that will reduce greenhouse gas emissions by more than 4,000 tons per year and will save the county between $40 and $50 million over 25 years. Alameda County (Calif.) also installed a 1- megawatt fuel cell system at Santa Rita Jail to meet half of the energy requirement, augmenting the jail’s 1.2-megawatt solar array.  Both projects received SGIP funding.

On the East Coast, New York City’s city hall uses a fuel cell to meet most of its electric load, saving the city about $45,000 annually in energy costs.   The technology was installed in 2013 to ensure reliable, onsite power generation during emergencies, such as storms that cause widespread power outages.  In 2012, the city of New Haven, Conn., installed a fuel cell to power, heat and cool the community’s city hall and Hall of Records.  The fuel cell system is expected to save $2 million over 10 years.

Sandra Curtin is Research Director at the Breakthrough Technologies Institute (BTI). The BTI is based in Washington, D.C. The BTI is a non-profit independent, educational organization. BTI was established in 1993 to ensure that emerging technologies have a voice in environmental and energy policy debates.

This video shows how a microbial fuel cell can extract energy from wastewater and turn it into electricity.