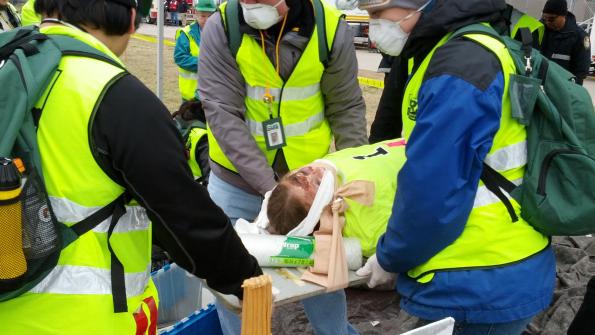 In the line of fire

In the weeks following the mass shooting in Aurora, Colo., an active shooter safety video, Run. Hide. Fight., went viral. To date, the video, produced by Ready Houston, has received more than 3 million hits, and the Mayor’s Office of Public Safety and Homeland Security fields daily calls about the nearly six-minute safety strategy short, which is available – for free – in multiple languages.

“Every day we get requests for permission to use it. Those requests come from the private sector, from individuals, from schools, from governmental agencies,” says Dennis J. Storemski, director of the Mayor’s Office for Public Safety and Homeland Security. Storemski explains that the video – like the other disaster preparedness videos offered through Ready Houston – is meant to save lives.

Run. Hide. Fight. has been the most popular video to date, but the film is just the tip of Ready Houston’s public safety iceberg. Representing the jurisdictions of Brazoria, Fort Bend, Galveston, Harris and Montgomery Counties, as well as the cities of Galveston, Houston, LaPorte and Pasadena, Ready Houston is a localized version of FEMA’s Ready.gov program. Through videos like Run. Hide. Fight., Are You Ready? and Together Against the Weather,  Ready Houston tailors emergency preparedness messages to the unique hazards faced in the greater Houston region.

Storemski says the initiative was borne out of the results of a survey by the National Citizen Corp office. The surveys, Storemski says, suggested Houston and the surrounding areas were in need of better preparedness information.

“There were too many people who had very little knowledge of how they should be prepared for various types of hazards or emergencies. Our goal is to keep our population informed and that’s a continuous process. For example, our area is subject to hurricanes. Well, it’s been five years since our last hurricane. But if you look at the population data, a lot of people have moved in within the past five years who’ve never experienced a hurricane. So it’s an ongoing process.”

To better facilitate that ongoing educational process, Ready Houston has gone to great lengths to ensure that emergency preparedness data is widely available. The films themselves are online, and Storemski and his team bring copies of videos to Ready Houston community training events, which include eight-week CERT community emergency response team training, medical reserve corps training, and school and neighborhood programs.

“Houston is probably one of the more diverse regions in the country. There are over 100 languages spoken in Houston, so we felt the need to put a lot of our materials available in different languages,” Storemski explains.

But even with Ready Houston’s focus on community programs and outreach, Storemski says the key to disaster preparedness begins with personal responsibility. “I think in a real catastrophic emergency people need to realize they will need to take care of themselves initially. Government response takes time, so people need to be prepared,” he says.

So how does one get prepared? By following Ready Houston’s Four Steps to Being Ready: Make a plan. Build a kit. Stay informed. Know your neighbors.

Storemski explains the steps: “Planning is important. Everyone in the family needs to know what the plan is. If we’re separated, where do we meet? … We remind people to build a kit. You’ll need cash; you’ll need medication; you’ll need food. That’s building your kit.”

Public officials and news media are important resources with regard to staying informed, “but the most important [step] is to have a plan,” Storemski says.

The Ready Houston website and its contents are funded through grants from the U.S. Department of Homeland Security, specifically the Urban Areas Security Initiative grant and the Regional Catastrophic Preparedness Initiative. The films have won a number of awards including the Hermes Creative Award and a Telly for film and video production.