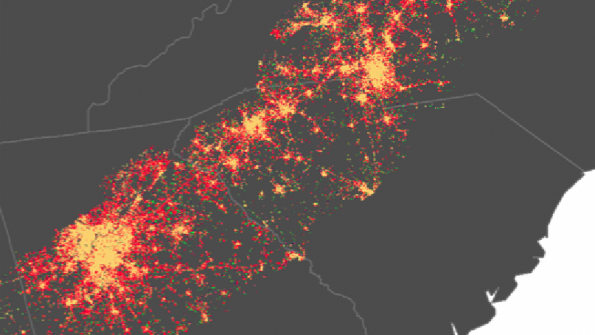 Without major changes to the way land is developed and used in the Southeast, by 2060 a  “megalopolis” stretching for hundreds of miles could emerge, interrupting natural processes and disrupting native species.

These findings, released by the North Carolina State University and U.S. Department of Interior's Southeast Climate Science Center, were published in the scientific journal PLOS ONE. The study found urban areas in the American southeast are expected to double in size over the next 45 years, leading to a sprawling, traffic-choked corridor.

The largest proportional increases are expected the Southwestern Appalachian ecoregion (central Tennessee), where urban areas are projected to expand by 261 percent. In contrast, the Southern Florida Coastal Plain ecoregion is expected to see the least growth, 42 percent.

“If we continue to develop urban areas in the Southeast the way we have for the past 60 years, we can expect natural areas will become increasingly fragmented,” Adam Terando, a research ecologist with the U.S. Geological Survey, adjunct assistant professor at N.C. State and lead author of the study said in a statement. “We could be looking at a seamless corridor of urban development running from Raleigh to Atlanta, and possibly as far as Birmingham, within the next 50 years.”

This growth would fundamentally change the region, and come at the expense of agricultural and forest lands, according to the report. The hardest hit would be agricultural lands, 11 to 21 percent of which would be converted to urban developments by 2060. For grasslands, the study projected a 9 to 17 percent loss. Forests are expected to lose 7 to 12 percent. Wetlands are expected to lose 1 to 7 percent.

Another negative impact of unchecked urban sprawl would be the proliferation of heat islands – the warming of cities due to human activity and development. This would allow pest species, such as cockroaches, to thrive and contribute to global climate change.

“It’s impossible to predict precisely what the specific ecological outcomes would be, but so far, the projections are not good in terms of biodiversity and ecosystem health,” Jennifer Costanza, a research associate at N.C. State and a co-author of the study, said in a statement. “Given that urbanization poses significant challenges to this region, decision makers will need to begin serious, long-term discussions about economic development, ecological impacts and the value of non-urban spaces.”

The group reached these conclusions by analyzing a “business-as-usual” (BAU) scenario, where projected growth is in line with past growth rates. The report states that while smart-growth initiatives that promote dense development are gaining popularity, the BAU scenario used is reflective of the region’s primary development model.

The group concluded that without significant changes, this type of growth will continue. “Decision makers can use this information to see how the status quo, if continued, could affect and interact with the goals, objectives and plans for the future,” the report states.