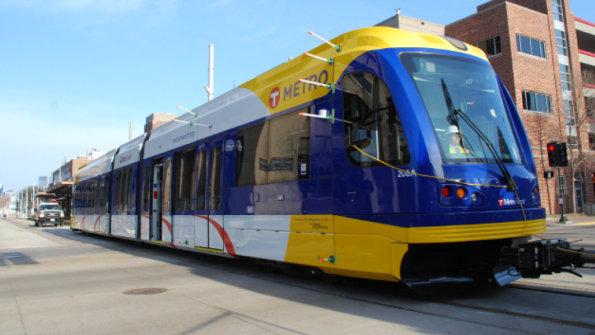 While the debate in Washington over the funding of the national transportation system bumps along in fits and starts, the newly opened Green Line that connects the downtowns of Minnesota’s Twin Cities keeps on rolling.

While the debate in Washington over the funding of the national transportation system bumps along in fits and starts, the newly opened Green Line that connects the downtowns of Minnesota’s Twin Cities keeps on rolling.

The $957 million light rail project glided over its 11-mile line for the first time on June 14, the second light rail project for the Minneapolis-St. Paul area and another installment of a 30-year dream for a regional transportation system for residents.

“This rail line is part of a policy alignment,” says Nancy Homan, policy assistant to St. Paul Mayor Chris Coleman. “It’s very important for the region. It’s recognition you can’t build your way out of congestion. We need alternative forms of transportation to make the region work.”

Leaders envision 23 stations along the main street that runs between downtown St. Paul and downtown Minneapolis and through the University of Minnesota’s main campus. Officials says it will revitalize neighborhoods through which the light rail passes, stimulate new businesses and restaurants and increase residential density downtown. It was funded through federal transportation grants and a quarter-cent sales tax on all retail sales in regional cities. Initial ridership has been above projections, according to Metro Transit, the line’s operator.

Homan also believes that a light rail system raises the profile of the area, which will have benefits for a long time to come. “It makes us competitive in our region, around the country and around the world,” she says. “More than one business has come looking for a quality transit system.”

The rail system was not without its detractors, though. One opinion column in a local newspaper stated that “rarely does one encounter such pure distillation of folly in public policy.” Not surprisingly, the column prompted 335 comments, many composed of thrust and parry between sets of outraged partisans. Some complained that the commute by train took longer than the same trip by bus.

Homan acknowledges that the rail line has its critics, but she countered that many of the complaints assign costs to the rail line that are not lodged against other transportation systems, including highways. In addition, some benefits from the rail cannot be measured in dollars and cents.

“In terms of environmental sustainability,” she says, “we will have many fewer single-occupancy vehicles. They don’t address our carbon footprint in their cost-benefit analysis or the cost to future generations of mitigating the damage. They are unfair complaints. If they are honest about comparisons, this is the most efficient use of our infrastructure.”

Part of the achievement of the new line was the regional approach that spurred cooperation among the often rival cities, the philanthropic community and civic organizations that serve the communities affected by the project. In addition, the U.S. Department of Transportation restructured funding formulas to ensure the addition of light rail stations in underserved minority neighborhoods along the route.

As a result, there are an increased number of affordable homes along the route, other homes were preserved and new arts and cultural offerings were encouraged, as was a vital retail sector. Leaders say they consider the project as much community development as transportation. Other transit projects, both rail and bus, connecting the cities with the suburbs have been envisioned as part of the region’s 2030 Transportation Policy Plan.

While regional leaders are happy that their light rail is finally running, Homan is concerned about the difficult road that transportation funding is facing in the nation’s Capital. Like areas all over the nation, federal dollars are critical support for mass transit as well as needed to maintain the road system that is the lifeline of the region.
“It’s a challenge for the whole nation,” Homan says. “We can’t kick the can down the road. I think we need to pass a transportation bill. I don’t think that the tensions in Washington serve any of us well.”