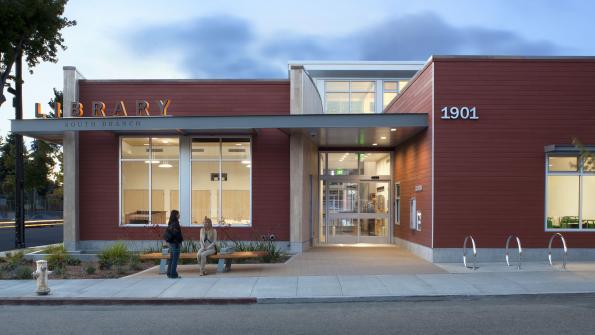 Across the United States, midcentury modern buildings are hitting their half-century mark, and a number are showing their age and wearing out. To responsibly manage these civic resources, municipalities have to meet the challenge of balancing program needs with the value of architectural heritage.

In 2008, voters in Berkeley, Calif., approved a $26 million bond measure to improve the city’s four branch libraries. The municipality held a public process for each facility to determine how best to bring each local branch up to code and meet current program needs.

South Branch, built in 1961 in a residential neighborhood, was the smallest of the four, designed by the office of John Hans Ostwald, a local midcentury modernist. The library was beautifully proportioned, with two reading rooms screened from the street. But by 2008, the addition of a community room and city-wide tool-lending library had altered the original building, which was also by now seismically deficient and didn’t meet Americans with Disabilities Act requirements.

The city selected Field Paoli Architects to revitalize the South Branch. The architects incorporated input from public meetings. “People wanted more space, more light and more technology,” says Avery Taylor Moore, principal of Field Paoli. After working with a subcommittee of the Berkeley Landmarks Preservation Commission to explore options for preserving parts of the existing building, the design team determined that renovating and expanding would not meet the community’s needs and would require adding a second floor that would diminish the original adult reading room.

While most favored a new facility, some believed in preserving South Branch, as well as the 1920s-era West Branch, and sued the city. After a year-long public process, the city council certified a joint Environmental Impact Report and voted in favor of new libraries on both sites; the lawsuit was settled out of court several months later.

The council also created a $100,000 fund to provide grants for the preservation of historic buildings in the south and west neighborhoods.

“The new South Branch library, which opened last year, honors its predecessor by reinterpreting its peaceful quality with a more outward-focused space,” says Moore. The new branch opens to the  neighborhood with expansive glazing. Where the former library had a low pyramidal roof and skylight, the new one has a 20-foot-high ceiling with operable clerestory windows for natural light and ventilation. Hemlock ceiling planks from the original adult reading room were repurposed for the new community room.

With individual adult, children, and teen rooms, the new South Branch offers more seating and technology resources, full disabled access and a larger dedicated space for the tool lending library.  It is again meeting the needs of this long underserved neighborhood.