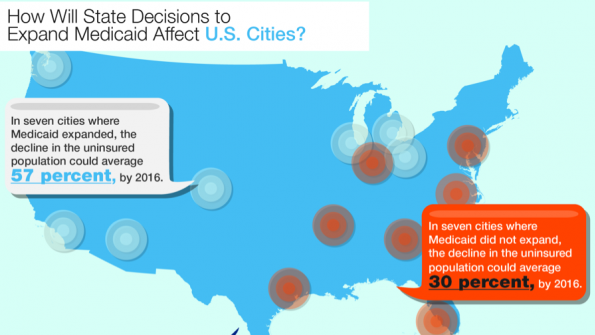 Expanding Medicaid would result in fewer uninsured residents and major economic benefits for cities, according to a new report. But some states remain skeptical, claiming potential for increased costs and lack of trust in federal government.

Embracing the Affordable Care Act (ACA), especially as it relates to expanding Medicaid, would result in fewer uninsured individuals and improved economic outcomes for cities, according to a new report. However not everyone is ready to opt in.

The report, released by the Robert Wood Johnson Foundation and published by the Urban Institute, estimated the effect of the Affordable Care Act on 14 “large and diverse” cities: Los Angeles, Chicago, Houston, Philadelphia, Phoenix, Indianapolis, Columbus, Charlotte, Detroit, Memphis, Seattle, Denver, Atlanta and Miami. The group used the Health Insurance Policy Simulation Model-American Community Survey (HIPSMA-ACS) to estimate the effects of the ACA on these cities.

Among the seven cities in states that expanded Medicaid (those are: Los Angeles, Seattle, Phoenix, Detroit, Denver, Chicago and Columbus) the group estimates the ACA will likely decrease the number of uninsured individuals by 57 percent by 2016.

Among the seven cities in states that did not expand Medicaid (or: Indianapolis, Memphis, Atlanta, Miami, Houston, Philadelphia and Charlotte), the ACA will still decrease the number of uninsured individuals by 30 percent by 2016. However, according to the report this number could be as high as 52 percent if Medicaid were to be expanded.

“Medicaid expansion is increasingly seen as an important issue for cities,” the report reads. “As we have shown, over 50 percent of the uninsured population in all but one of the cities we studied will be potentially eligible for either Medicaid or income-related subsidies, assuming the Medicaid expansion. This means substantial revenue will flow into these cities and the economies of these cities should benefit greatly.”

One way the economies of cities would benefit is through federal funding. More than half the population in all but one city reviewed (Detroit) would be eligible for some kind of healthcare assistance, according to The Washington Post. The resulting flow of revenue would help these cities economies prosper.

For a complete visual breakdown of the report’s data, click here.

So why haven’t more state decided to expand? The cost burden and skepticism of the federal government remain the most prevalent arguments against participation, according to California Healthline, a healthcare newsource. For states expanding Medicaid programs, the federal government has promised to fund 100 percent of he expansion for three years and 90 percent after.

However, even the 10 percent contribution for which states would be responsible could be cost prohibitive in some areas, according to California Healthline. Additionally, the source reports mistrust of the federal government to uphold its end of the bargain holds states back. Many Republican lawmakers argue paying 10 percent more for a program that already takes up much of respective states’ budgets is wrong, and that once Medicaid is expanded, it will be difficult to roll back should federal funding fail.

Many Red-State governors argue Medicaid is an unsustainable system, and that expanding the program would be financially disastrous, according to a Forbes editorial. In Arkansas, the expansion has run over budget in every month of operation, prompting state leaders to seek more federal funding.

However, the healthcare industry in some states may struggle financially without Medicaid expansion, according to The News Advance, a Lynchbrug, Va., newspaper. The University of Virginia Medical Center, and other “safety net” hospitals (those that treat a disproportionate amount of uninsured individuals) are bracing for financial losses. As hopes for expansion fade, these hospitals will lose federal subsides for treating the uninsured, and with coverage unavailable due to lack of expansion, the number of uninsured patients hospitals must treat will increase.

Together, the medical center and the Virginia Commonwealth University Medical Center, another safety-net hospital, say they could lose up to $386 million in federal subsidies between 2017 and 2022 without Medicaid expansion, the paper reports.

Some experts say in time, reluctance to expand Medicaid under the ACA will fade. Caroline Pearson, a vice president at Avalere Health who tracks Medicaid issues and ACA implementation, told California Healthline the big movement towards expansion might be over, but states will slowly come around.

“As the … anti-ACA politics die down generally, specifically the anti-Obamacare Republican politics, the pressure will come off. It will become more of a debate about coverage and finances and budget impact, and less of a debate about Obamacare and whether you’re supportive of it. I think that will make it easier for some of these Republican states to actually expand,” she told California Healthline.