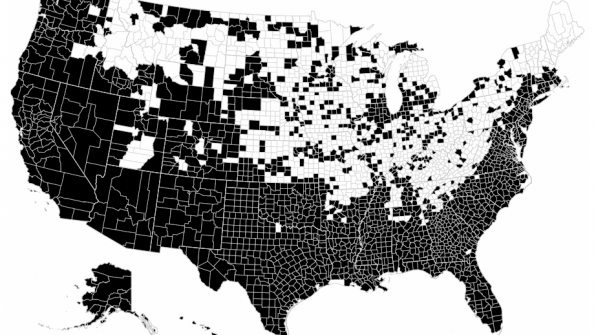 Diversity at a county level

Although minority populations are growing, according to Census Bureau data compiled by The Washington Post, non-Hispanic whites accounted for at least 90 percent of the population in more than 33 percent of the nation’s counties.

While America is called a melting pot, when broken down at the county level, whites are still the strong majority.

According to Census Bureau data compiled by The Washington Post, non-Hispanic whites accounted for at least 90 percent of the population in more than 33 percent of the nation’s counties.

The five counties (with populations above 10,000) with the highest percentage of white residents were:

The Washington Post reports 96 counties have a black or African-American population greater than 50 percent. Most of these counties are located in Louisiana, Arkansas, Mississippi, Alabama, Georgia and South Carolina.

Five counties, according to The Washington Post, were more than 80 percent black. These included Jefferson, Claiborne and Holmes Counties in Mississippi and Macon and Greene Counties in Alabama.

93 counties were majority Hispanic. Seven counties had Hispanic populations over 90 percent, including Starr, Webb, Maverick, Zapata, Zavala, Jim Hogg, and Hidalgo Counties in Texas, according to The Washington Post.

For visualization of the breakdown, check out an animated .gif here.