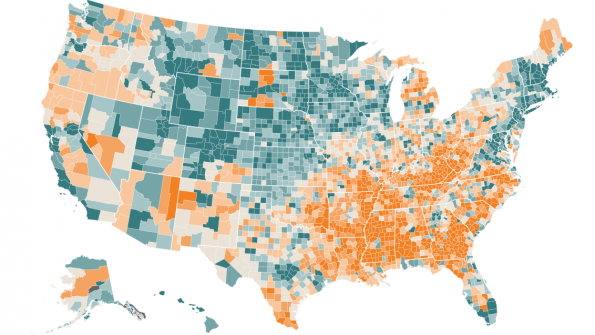 The New York Times crunched the numbers to find the easiest and most difficult counties in which to live.

By several measures, Clay County, located in eastern Kentucky, is the hardest place to live in America.

That’s according to an analysis by The New York Times, which compared every county in the U.S. on six data points: education (specifically, the percentage of the population holding a bachelors degree), median household incomes, unemployment rates, disability rates, life expectancy and obesity rates. Six of the top 10 toughest counties are in Appalachian Kentucky, while the remaining four are in the rural South. The complete list includes:

The analysis highlights an often-overlooked issue in the argument over income inequality, according to CBS News – the persistence of rural poverty. Citing numbers from the International Fund for Agricultural Development, CBS reports the highest populations of those in poverty reside not in America’s cities, but in rural regions. 14 percent of rural Americans live in poverty, compared to 12 percent of urban residents, according to the fund.

Poor rural counties have a lot standing in their way, according to CBS, including lack of quality health care, obesity issues, problems with drug addiction and waning economic opportunities. There are many ideas on how to address these issues, but few clear-cut answers.

These zones would seek to attract employers to impoverished areas by reducing income taxes to 5 percent. Paul would also cut payroll taxes and eliminate capital gains taxes in areas with unemployment 1.5 times higher than the national average.

“It’s better to look at an industry that’s suffering and say, ‘What are the obstacles government has placed in its way?’ and try to get those obstacles out of the way, rather than having specific, direct government input,” Bloomberg reports Paul said at a press conference shortly after Detroit declared bankruptcy.

On the other hand, the easiest county in which to reside, according to The New York Times, is Los Alamos, N.M. This is due largely to a thriving nuclear power and weapons industry; Los Alamos National Laboratory directly employs one out of every five county residents.

To see where your county ranks, check out the interactive map.