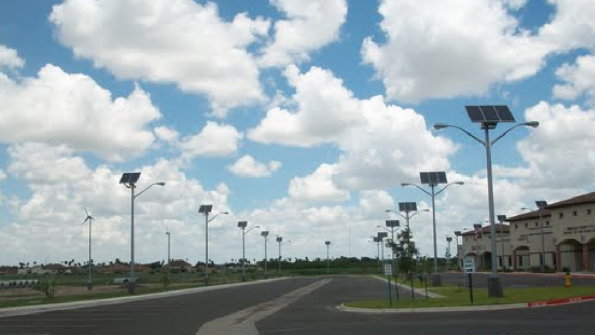 Hidalgo County is a largely rural county located on the Mexican border at the southern tip of the state. The county is dotted with more than 1,000 colonias, which are low-income communities that often have little to no infrastructure. Improvement of basic infrastructure in these communities has been held back by a lack of funds.

Gang violence and general vagrancy is common in some neighborhoods. Residents have cited a lack of lighting infrastructure as a contributing factor, as darkness has made it difficult to identify potential culprits or clues. Residents of Hidalgo’s colonias have also pushed for increased lighting because it enables them to feel safer and to be more active past sunset.

Hidalgo County authorities were in a conundrum – they wanted to provide citizens with critical lighting infrastructure, but not at a great cost. The solution: commercial LED outdoor lighting powered by solar energy.

With funding from the American Recovery Act, Hidalgo County contracted Palm City, Fla.-based Sol Inc., to develop and manufacture solar-powered lighting systems for Precincts 1, 2, 3 and 4. Because commercial outdoor solar lighting is an off-grid application, (it does not use energy from the local utility) installation was seamless. Sol Inc. delivered the lights to Hidalgo County, which installed them with minimal cost and set-up work.

With reliable street lighting in place, colonia residents reported an immediate improvement in their quality of life. Activities, which before concluded at sunset, can now safely continue into the night. Some colonia residents have extended practice hours for local sports teams and organized evening exercise groups. These lights have also been placed in strategic locations such as bus stops and local parks, improving safety.

While Hidalgo’s focus has been increased safety, San Diego County is setting out on an unprecedented cost-savings project. A partnership composed of the local utility, San Diego Gas & Electric (SDG&E), industry group CleanTECH San Diego and many of San Diego County’s 18 cities and public agencies, is testing a pilot that will do much more than reduce the costs and energy output of the street light network. Together, they’re trying to be the first region to monetize the street light network by turning it into a smart grid.

SDG&E spurred the working group in 2009 through its Local Government Partnership Program. Since its inception, the group has completed two pilot projects to evaluate broad-spectrum street lighting options to reduce energy usage. As a result, the group has retrofitted 60,000 street lights in 14 cities, saved 20 million kilowatt-hours and $3 million in taxpayer savings annually and spurred $25 million in economic development for San Diego County.

Each street light in the pilot possesses an adaptive control system with utility-grade metering built into the control node. Utility-grade meters combined with a special metered dimming tariff will allow for sub-metering and billing of third-party applications, essentially creating a mini energy grid.

Currently, there is no street light metering in California. A fixed monthly tariff rate is based on the light’s wattage and amount of time in service. The current model does not encourage energy efficiency, because cities cannot reap the monetary benefits of dimming street lights.

SDG&E has deployed a cross-functional team to work with San Diego to map out new street light metering and billing scenarios. Once a new metered rate is in place, the city can lease space on the street light grid, which will enable a variety of community-enhancing applications, including holiday lights, chemical sensors and electric vehicle charging stations. The street light grid will also be able to deliver Wi-Fi to under-served neighborhoods and enhance cellular service with microcells.

To share the pilot project’s findings, San Diego offered a demonstration of this system at the 2014 EPA Climate Leadership Conference in February.