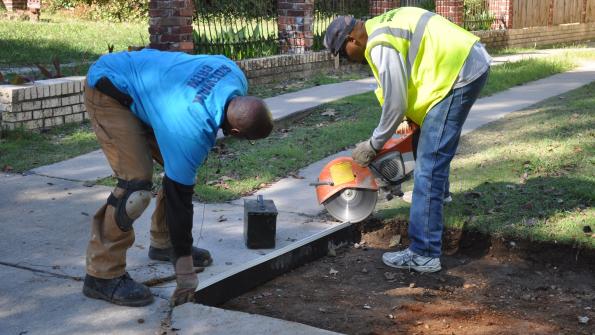 For those in the public sphere, it likely ain’t news that municipal services are seldom “sexy.” There are the few exceptions – the new parks, the streetscape projects – but by and large, city and county services do the dirty work behind the scenes to make these pretty projects possible.

Yes, the dirty work might not be glamorous, but in certain cities, like Little Rock, Ark., the oft-unseen beauty behind the process goes beyond the pleasure of a job well done. With its Felon Re-entry Sidewalk Construction Program, the public works department in the heart of Razorback Country is beautifying Little Rock twofold: by building and repairing sidewalks to ensure a “walkable” city, and by giving some of the city’s formerly incarcerated citizens a second chance.

“This is no longer a pilot,” City Manager Bruce Moore says of the program, which had its inaugural year July 2012 to July 2013, “I see this as a permanent part of the public works department. The community is seeing improvements in the neighborhoods, and these individuals are getting the opportunity to earn a living and support themselves and their families.”

In his time as city manager, Moore has attended countless Town Hall meetings. When speaking with residents, he was confronted with a persistent problem – that locals who had been previously incarcerated could not find work. With no employment prospects, many of these former inmates returned to the life they knew. According to information provided by city officials, 58 percent of criminal charges in Little Rock are filed against individuals with prior felony arrest records, and 77 percent of criminal charges are filed against individuals with prior arrest records.

Acknowledging the high rate of recidivism and faced with a growing list of public works projects that could use extra hands, Moore decided to take a chance on those individuals who, in an already rough economy, were at the greatest disadvantage for employment. Through neighborhood outreach efforts, Moore advertised the Felon Re-entry Sidewalk Program, which would employ 10 former inmates in the Public Works Department. In addition to garnering a paycheck, the chosen 10 would learn valuable skillsets to increase their chances of continued employment in both public and private sectors.

To narrow the list, community partners provided recommendations, and Moore required applicants to attend a week’s worth of pre-employment training, which served as a screening process. After the screening, the 10 were chosen and placed under the supervision of four public works professionals. Moore also appointed a coordinator to assist with issues that would typically impede employment, things like arranging rides so those without driver’s licenses could arrive at work on time, and arranging for childcare, so those with children would not have to choose between work and family.

“This is to show the city and the private sector that individuals, when given the opportunity in a viable environment, will produce,” Moore says.

There have been bumps along the road. Only six of the original 10 made it all the way through the year-long program, and Moore said he has had to spend more time with this group than he traditionally does with new hires. But the benefits, he says, have been worth the effort. In the months following the pilot, one of the six was hired as a full-time city employee, and others have gone on to assist in additional areas of public works. Moore said the program’s success is inspiring Little Rock leadership to expand such offerings in other departments and areas, including fleets and clerical positions.

“It’s more than just giving somebody a job. We’re really making a concerted effort to give individuals who’ve made a mistake in the past a second chance,” Moore says. “After they serve their time, if they want to be upstanding citizens, the public and private sectors should afford them those opportunities.”

The Felon Re-entry Sidewalk Program is funded with monies from a one-cent sales tax for sidewalk projects. Now in its second year, the program has hired its second group of trainees.