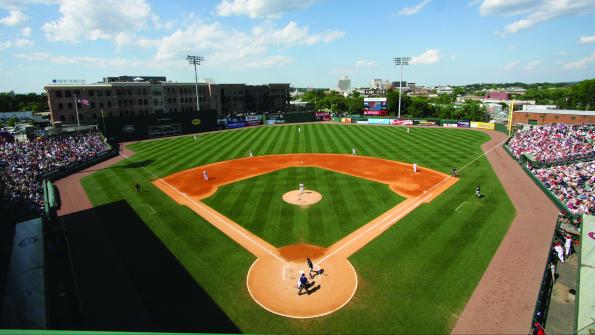 The Atlanta Braves recently shocked municipal officials – and fans – by announcing the franchise’s move to Cobb County, about 15 miles north of its current downtown location. Cobb leadership has championed the move, welcoming the team with open arms (and open checkbooks), but while Cobb celebrates, Fulton County is reeling, wondering what will become of Turner Field when the Braves move out in 2017.

Yes, a move that could benefit one Georgia county could very well harm another, and critics argue the expense of a new facility is unnecessary (and ill-advised) as hundreds of millions of public dollars will be used to support private enterprise.

And this isn’t the first time a much-anticipated stadium received backlash over its finances. Publicly funded stadiums are a contentious issue, with proponents harping on the positive economic impact sports stadiums can bring, while critics say public funding can be better spent.

Santa Clara was lambasted recently in the media for the deal on the 49ers new stadium, which will cost around $1.3 billion. The city will kick in $116 million in public funds, but the “private” funding will come from a new entity, the Santa Clara Stadium authority, borrowing $950 million. Should something go wrong, the taxpayers will likely take the hit.

When the Cincinnati Bengals, who for decades shared a stadium with the Cincinnati Reds, put pressure on the county to build a new stadium, the county agreed to pick up the $400 million tab. But after a decade of belt tightening and budget slashing, the deal was labeled “one of the worst professional sports deals every struck by a local government,” by The Wall Street Journal.

But the economics of stadiums are more complex than who foots the bill. Joe Feldcamp, Hamilton County director of stadia and parking, says that manipulative team owners and shady backdoor dealings make for good headlines, but this isn’t an accurate portrayal of the stadium’s story.

Feldcamp says in the late 90s, the Bengals put pressure on the county to build an up-to-date stadium, and the council agreed to allocate a percentage of sales taxes to fund its construction.

Funding for the $454 million stadium was determined using a conservative estimate of a 3 percent annual growth in sales tax revenue, Feldcamp says, adding that most would have estimated the growth to be closer to 7 or 8 percent.

But when the recession hit, the 3 percent estimate proved too large. Budgetary shuffling needed to take place, layoffs were made, and purse strings were tightened. County staff shrank from around 6,000 to 3,000, according to Feldcamp. However, Hamilton has always fulfilled its lease obligation, and has even been able to set aside an annual $1 million capital improvement fund to keep up with the investment.

The “100 percent publicly funded” figure seemed to irk some, but it isn’t unheard of for a municipality to fully fund such a project. Judith Long, a Harvard University economist specializing in public funding for sports arenas, found in a study that “voters consistently approved bond issues to pay 100 percent of costs for new sports facilities throughout the 1960s and 1970s.” Although now, she says, public-private partnerships have become more popular.

Long found that by 2001, the public sector, including local, state and federal governments had paid approximately $16 billion to participate in the construction of the 100 major league ballparks, stadiums and arenas currently in use. Long warns that publicly financed stadiums can be financially treacherous, and even those where private interests share in the funding, costs can quickly spiral out of control due to complex development and leasing agreements.

Finances for the public private-partnership of the new Vikings stadium, which broke ground last month in Minneapolis, have been under the microscope. According to city materials, the project is estimated to cost $975 million. Of that, the team itself is kicking in $477 million, the state, $348 million and the city, $150 million. The city and state portions will come from already existing taxes and fees. Critics have argued the deal is irresponsible, but some city officials think otherwise.

As with the Bengals, the Minneapolis Vikings forced the city’s hand by threatening to pull up stakes. The decision to build the stadium was contentious (the council only approved construction by a 7-6 vote) but Chuck Lutz, deputy director of the Minneapolis Department of Community Planning and Economic Development, says the benefits are already offsetting the costs.

Shortly after construction was approved, a $40 million development deal was finalized. Lutz says, “This wouldn’t have happened if it weren’t for the stadium.”

But world-class cities with professional league teams are not the only ones benefiting from building sports arenas. Greenville, S.C., home to the Greenville Drive, a minor league affiliate of the Boston Redsox, has seen enormous returns, both financially and culturally, since its stadium’s 2005 opening.

Craig Brown, president and co-owner of the Drive, says that as part of the deal, the city donated the land as well as improving infrastructure around the city’s west end stadium, while the construction costs themselves fell on the team.

“It was a very successful public-private partnership,” Brown says, rattling off the litany of downtown improvements seen due to the stadium’s construction. “New apartments, new restaurants, increased property value,” he says. “We operate the team with economic development in mind.”

Understanding the value a modern stadium can add, the Nashville Sounds, another minor league baseball team, will soon be getting a new stadium in the city’s underdeveloped north side. Richard Riebeling, Nashville’s finance director, says the stadium will serve as a cultural anchor and economic engine.

“The Sounds have been operating out of the same stadium since ’78,” Riebeling says. While the facility was kept up over the years, he says it was approaching the end of its lifespan. Various administrations made plans to build a new stadium for the team, but all these plans all fell through.

Now Mayor Karl Dean has identified a site that would fill the gap between the underdeveloped Germantown neighborhood in north Nashville and the downtown region. The new stadium will be located on a site that has historic ties to baseball, dating back nearly a century, according to Riebeling.

Financed by the city, the ultimate cost, including infrastructure and development projects, will be around $65 million, with the hard cost of the stadium itself being $37 million.  Riebeling says funds will come from a variety of sources, including sales taxes and levies on new developments around the stadium.

“North Nashville is historically African American… and underdeveloped,” says Riebeling. The administration hopes the stadium will “send a strong message” of its dedication to the development of all parts of Nashville, not only the already affluent. Over the next 24 months, Riebeling says, over $150 million will be infused into an economically depressed neighborhood.

The stadium has been approved by all concerned legislative bodies, and Riebeling says “it will hopefully be ready by opening day – April, 2015.”