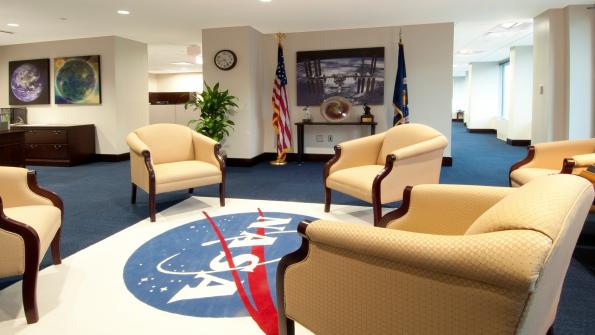 The National Aeronautics and Space Administration headquarters in Washington has been outfitted with energy-saving Cree CR Series LED lighting fixtures.

Cree, Inc. has outfitted the National Aeronautics and Space Administration (NASA) headquarters, a leased facility in Washington, with CR Series LED troffers. The LED installation is part of a renovation of the 600,000 square-foot building. More than 1,300 of the lighting fixtures have been installed.

The new fixtures are designed to last for more than 50,000 hours, twice the lifetime of comparable linear fluorescents, according to the company. Installation of the Cree linear luminaires enabled a reduction in fixture count by 10 percent, as well as reduced maintenance and operational costs for the NASA headquarters. The new lighting system also supports the objective to achieve LEED Silver certification for the facility. The photo to the right shows an NASA office corridor with the new fixtures.

The CR22 troffers feature integrated Lutron EcoSystem dimming technology and a Lutron Quantum lighting control system. The controls provide the flexibility needed to suit the lighting to the occupant. The system can also extend the LED’s lifetime.

In the video, Cree showcases its new CR LED troffer series at a recent Lightfair event.