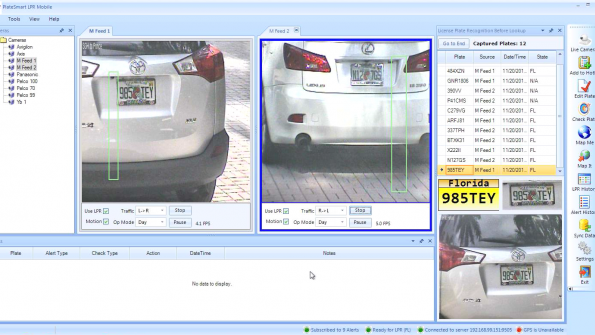 GPN got the views of John Chigos, CEO of PlateSmart Technologies (in photo at right), on ALPR technology. The Oldsmar, Fla.–based company offers a software-only and hardware-agnostic LPR solution.

GPN: How is the ALPR market shaping up in 2014 in the U.S.?
John Chigos: Our research shows that ALPR in general will grow exponentially over the next year as more and more security agencies discover its effectiveness. We envision a particularly strong year for PlateSmart. The product’s flexibility and affordability will make it indispensable to the private as well as the public sector.

GPN: Do you have any advice for state, local and federal government administrators who are planning to buy an ALPR setup? What should our readers look for in an ALPR setup?
JC: First, be aware of the laws regarding ALPR usage in your state, as they can vary to a surprising degree. Second, make sure that the system you are purchasing will provide the best possible return on your investment. That is, make sure that it consistently reads plates accurately and recognizes state jurisdictions, that it provides actionable intelligence in real time, that it integrates well with your current surveillance hardware, and that it provides comprehensive data management and analytic features.

Prospective buyers should make sure that the ALPR system they are considering is sufficiently protected from the elements, and that the system can perform effectively at any time of the year. Also, make sure that the ALPR system that is being considered has appropriate and robust safeguards in place to protect sensitive data, and that it does all of this at a reasonable price point.

GPN: Are ALPR systems quite different from the NSA surveillance program for keeping tabs on citizens? Are they totally different forms of surveillance?
JC: Yes, quite different. The NSA program monitors private electronic communications (e.g. e-mail, telephone calls, etc.), which can be considered an unconstitutional invasion of privacy if conducted without a warrant.

An ALPR system does no such thing; rather, it simply captures and reads license plates that pass by its cameras. If the technology is used by law enforcement or some other agency with legal access, it automatically compares that data to databases to check for active wants or warrants. Police have been able to do the same thing manually on their in-car computers for decades; an ALPR system just does it a lot faster. This is completely constitutional; the Supreme Court of the United States has repeatedly ruled that license plate numbers, which are required to be publicly displayed, do not carry an expectation of privacy. ALPR merely detects and records information that is already publicly available, unlike the NSA program, which goes much further.

About the product: PlateSmart’s Mobile LPR Software is completely self-contained. The software is universally compatible with standard PCs and a variety of surveillance cameras. The LPR software recognizes the state jurisdictions from all 50 states. The product functions as a stand-alone system or integrates with third-party hardware and software products.