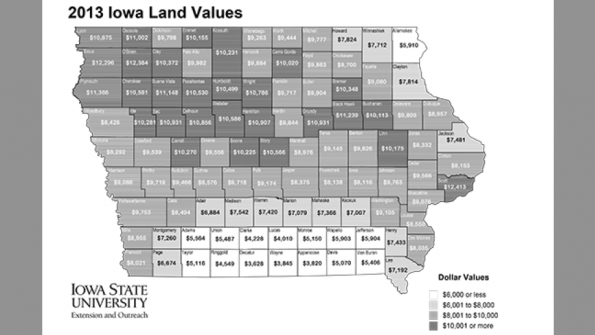 Iowa farmland value may have peaked

The value of Iowa farm land has steadily increased, but uncertainty in the marketplace, in addition to declining corn and soybean costs, may mean the boom is coming to an end.

The average price of an acre of Iowa farmland hit a record high this year, $8,716, but experts think the bull-run may be coming to an end, leaving members of the farming community to ask, will the gains go out with a bang or a whimper?

An annual survey, conducted by researchers at Iowa State University, found that an acre of farmland in the state is worth 5.1 percent more in 2013 than it was in 2012. Businessweek reports values have been steadily increasing since 1986.

Scott County, according to the report, saw the biggest increases this year. At an estimated $12,413 per-acre, the most expensive in the state, the county also saw the highest percent increase in value, 12.45 percent.

But the near-30-year run of increases could be coming to a close. Businessweek reports farmland value is directly correlated with farm income, which his derived from commodity prices.  But commodity prices are dropping, according to Michael Duffy, an Iowa State economics professor and extension farm management economist who conducts the annual survey. Corn is down 33 percent for the year, and soybean prices have dropped 11 percent.

But that doesn’t necessarily translate to economic free-fall. “The 2013 land value survey shows a market in flux, with strong and weak price sales occurring at the same time,” Duffy said in a statement. “The key question is if this shows the market is going to settle, if it is just pausing before another takeoff in values, or if the market has peaked and due for a correction.”

The fragile nature of the market has caused Iowa farmers, who made nearly 80 percent of land purchases in the state this year, cautious, according to The Des Moines Register. The impending decline in land value and decreasing commodity rates coupled with a proposed rollback in the mandate for corn-based ethanol, interest rate uncertainty and difficulty in passing a farm bill have played into fears in the agricultural marketplace. These fears could translate to shifts in food and gas prices.

Income from farms is of particular concern. 76 percent of survey respondents, Duffy told The Des Moines Register, are worried about their income. This years' 5.1 percent increase in land value was the smallest in over a decade. Previous years saw annual double-digit increases. The only decline was in 2009, when land prices slid two percentage points.

Businessweek reports historical data is of little help in predicting what the market could do. The current gains are the third “golden era” for Iowa farmland value in the past century. The first ended with a slow decline from 1921 to 1933, and the second with sudden fallout from 1981 to 1986.

If prices are to deflate though, Duffy is confident they won’t cater. “It’s going to be more akin to a tire that gets a nail in it – a slow letdown,” he told Businessweek. “A lot of it will depend if commodity prices stay in this downward trajectory or if they flatten out.” Duffy anticipates the market could decline 10 to 20 percent over the next three to five years, according to The Des Moines Register.