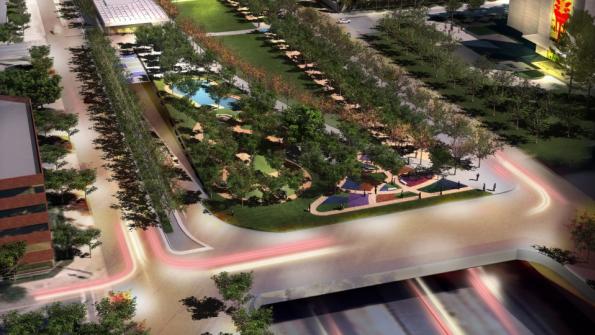 Put a lid on it

Dallas constructs a park over the freeway.

Like so many, Dallas officials like their green space, but unlike other cities where paving the way to the future means…well…paving, Dallas is taking a different approach. The idea: putting a lid of topsoil and grass over the interstate and Central Expressway to form a park, giving Dallas residents relief from the expanse of asphalt.

Designing an at-grade park where visitors enter from surrounding streets without ascending steps or ramps was major structural challenge for designers of the new Klyde Warren Park. It was also important that the design met the state highway height clearance requirement of 16.5 feet so that the freeway would not be impeded.

Adding to the challenge, structural engineer Mir Hadi Ali also needed to calculate how much the amenities for the facility would weigh. The equation included factors such as the weight of 322 trees at maturation, 904 shrubs, equipment, soil, park attendees and even rainwater. It became clear that weight-saving measures must be employed.

Klyde Warren Park was funded through a public-private partnership, with more than $50 million in private donations and nearly $60 million in city, state, and federal funding. In 2004, The Real Estate Council provided $1 million grant to fund feasibility studies and provide staff support during the incubator stage. Texas Capital Bank Founder Jody Grant heard about the project and joined the cause with a $1 million personal donation and a $1 million donation from the bank.

Today the park is filled with amenities funded by Warren and other private donors: a playground, dog park, water fountains, gardens, walking paths, a concert stage and a restaurant. The park offers yoga classes, croquet, Pétanque, ping-pong and more. One cross street open to traffic divides the park into two segments—a two-block swath and a one-block section.

“Being out there now, it has changed from an inhospitable, no-man’s land to a pretty comfortable space, it was almost overwhelming how much noise and traffic was there.” John Reynolds, the city’s parks project manager said in a statement, “It has changed the character of the service road to more like a street scene. It’s a lot calmer out there than I ever anticipated.”