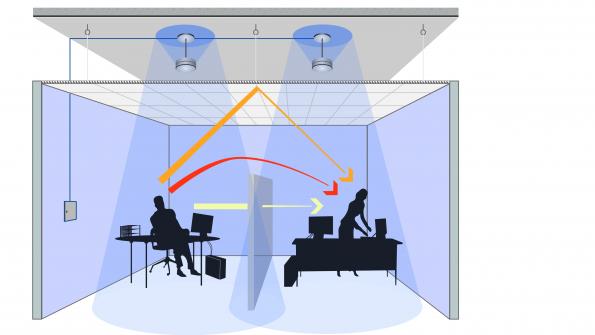 How to achieve effective acoustics (with related video)

Acoustics expert Niklas Moeller, who is vice-president of K.R. Moeller Associates Ltd., tells how to increase speech privacy and control noise in offices and other government facilities.
Editor’s note: This article primarily focuses on how to achieve speech privacy and noise control in government and commercial office interiors. However, the methods described can also be applied to a variety of government applications, such as call centers, hospitals, courthouses, policing, military and other high security facilities. Here are the views of acoustics expert Niklas Moeller on this important topic.
Absorb, block and cover are the principal methods acoustic professionals use to increase speech privacy and control noise. Because all three are required for the best results, they are collectively referred to as the ABC Rule.
Absorb Noise
Absorptive materials reduce the volume of noise reflected back into a space, the length of time noises last and the distance over which they travel. Invest in a good acoustic ceiling tile and ensure consistent coverage throughout the facility. Limit the lighting system’s impact on the ceiling’s performance by selecting an indirect system. Minimize the use of hard materials, such as glass and metal. Use absorptive workstations, at least inside and above the work surface, and install soft flooring in high-traffic areas.
Block Noise
“B” is for blocking. Closed rooms use walls and doors, but blocking is also relevant for open plans. For example, locate noisy office machines and high-activity areas, such as call centers, in remote or isolated areas. Maximize the distance between employees and minimize direct paths of sound transmission by seating employees facing away from each other on either side of partitions. Partitions that are 60 to 65 inches (1.5 to 1.65 meters) are effective because they extend beyond seated head height. Using taller partitions in high traffic areas can also be beneficial.
Cover Noise
“C” stands for covering up unwanted noises by providing an appropriate ambient sound level, which is typically between 42 and 48 dBA in commercial interiors. This requirement is met by a sound masking system, which uses a series of loudspeakers installed in the ceiling to distribute a sound most often compared to softly blowing air. Though this sound is audible, occupants perceive treated spaces as quieter because it covers up conversations and noises or reduces their impact by lowering the magnitude of change between the baseline and peak volumes in the space. The sound is also specifically designed to mask the frequencies in human speech.
Reduce Noise
Though not included in the ABC Rule, noise reduction is also important. It involves removing noises that simply do not need to be there, such as those caused by improperly designed or balanced ventilation, as well as adopting appropriate behaviors, such as using a reasonable voice level within an open plan.
However, occupants always generate noise as they work. So, while behavior modification is helpful, the remainder of the acoustical burden has to be borne by design.
About the author

Niklas Moeller (pictured at the right) is vice-president of K.R. Moeller Associates Ltd., a global developer and manufacturer of the sound masking system, LogiSon Acoustic Network. K.R. Moeller Associates is headquartered in Burlington, Ontario. The author can be reached at [email protected]
Go here for the first part of this series, which tells how to specify sound masking in facilities.
This video offers examples of products that are used for soundproofing and noise control in offices and conference rooms. Some of the products include acoustical wall panels, acoustic ceiling tiles and acoustic door seals.
Tags: Public Works & Utilities Smart Cities & Technology Article