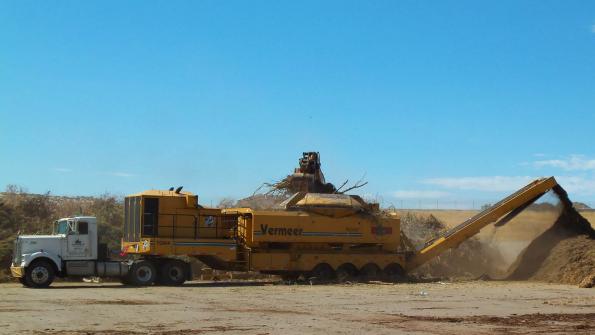 After a major windstorm in 2011, the city of Bountiful, Utah, relied on tub grinders and recycling efforts to remove green waste. The equipment helped speed up cleanup efforts after the extreme weather.

In the early morning hours of Thursday, December 1, 2011, residents of Bountiful, Utah (2012 population: 42,898) were awakened by hurricane-force, down-sloping winds slamming into their city. The National Weather Service said the storm registered sustained winds of 40 to 55 miles per hour.

“It was about 2:30 in the morning when we got the first call from police dispatch, saying a tree was blown across one of the city’s main streets,” says Bountiful Streets, Sanitation and Landfill Superintendent Gary Blowers. “We worked to get it cleared away by 6 a.m., and from then on, we were inundated with calls saying trees had been blown down citywide. Most of the downed trees were those huge pines that had been uprooted. And when the trees go down, they take the power lines with them.”

As they emerged from their homes to assess the havoc wreaked on their town, city residents faced power outages, freezing temperatures and an overflow of green waste. The city’s landfill opened at 7:30 a.m. and didn’t close until 9:30 that night. After the initial drop-off, residents still had four weeks’ worth of stumps and tree limbs to clear up and haul out.

At first glance, the storm’s massive quantities of green yard waste were overwhelming. Bob’s Tree Service, Inc. in Wood Cross, Utah, and the city of Bountiful’s landfill operations quickly developed a plan to clear out and process the excessive amounts of waste.

To accommodate the influx of green-waste material, the city’s landfill freed up several acres of space to set up four different staging areas. One staging area was designated for contractors with large dump trucks. Three more areas were designated where residents could come in to unload their waste by hand.

To tackle green-waste recycling projects, the tree care company relied on three Vermeer tub grinders — a TG400 and TG400L, and one TG800.  As the waste from the storm was delivered to the landfill, the grinders were used to keep the landfill’s main staging areas clean. The tub grinders quickly processed the green-waste materials as soon as the materials were dumped. Later, the grinders tackled the large-truck material. Go here for more information on Vermeer tub grinders.

Because of the windstorm, the city of Bountiful’s landfill took in about 20,000 tons of green waste in 2011. In previous years, the average has been around 8,000 tons per year of green waste.

Officials in Bountiful, Utah, learned several lessons from the 2011 windstorm. One key lesson learned was to make sure that there was plenty of free landfill space to handle the overwhelming influx of debris that residents brought in all at once. By having plenty of landfill space readily available, landfill staffers were able to efficiently process the green waste material and get people in and out of the landfill facilities as quickly as possible.

This video highlights the performance and safety features of Vermeer tub grinders.