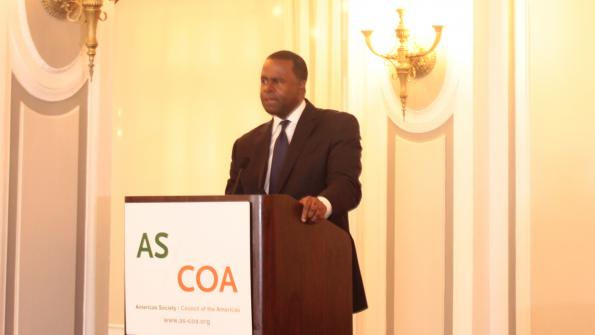 To foster a more thriving community, both culturally and economically, Atlanta Mayor Kasim Reed vowed Tuesday to enact policy that will make Georgia’s capital more welcoming to all nationalities.

During the luncheon hosted by advocacy group the Americas Society and Council of the Americas, Mayor Reed expressed that while immigration policies are usually considered a federal issue, it is up to local governments to take the lead.

“Now everybody that knows me knows I’m a fan of cities,” Reed said, “While most people feel immigration is a federal issue, I think the lack of progress in Washington should energize us to do more in cities.”

Invoking the spirits of famous immigrants past, such as Albert Einstein and Madeleine Albright, Reed stated America has always been a nation of immigrants, and “We can no longer live in a world where certain communities are marginalized.”

“Atlanta ranks number two in job growth,” Reed reported, noting the city is second only to Houston. To keep that momentum going, Reed said Atlanta must be attractive to all, regardless of national background.

During a panel discussion, representatives from Nashville, Tenn., spoke about the lessons learned from their battle against immigrant-prohibitive legislation, and suggested measures other cities could take to become more immigrant-friendly.

Nashville has a high concentration of Kurdish immigrants as well as those of Latin American decent, according to Negri, who said the measure aimed to marginalize these individuals.

The ballot measure catalyzed the creation of “Nashville For All Of Us,” a grassroots movement that helped defeat the English-only law, as well as enact proactive measures to help recent immigrants, including:

The lesson learned in Nashville, according to the speakers — and the sentiment Reed hopes to adopt in Atlanta — is that, to be economically competitive on a global scale, a city must be welcoming internationally.