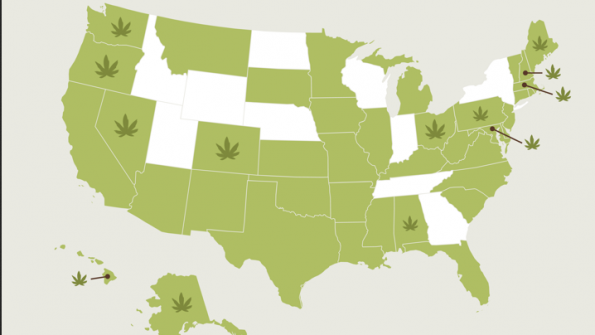 More states are getting on board with marijuana legalization, be it for recreational or medicinal purposes. However, federal pressures are posing a problem for pot.

With prisons overflowing with non-violent drug offenders, and pressures from medical interests and private citizens, marijuana’s legalization has become the center of a growing national debate.

40 states have proposed or enacted legislation regarding marijuana use, be it recreational or medicinal, according to WestlawNext, an online legal research tool. Here’s the breakdown – in recent years:

New Mexico, Rhode Island and West Virginia have commissioned studies to analyze the impacts of legalization, according to Reuters. Maine and Massachusetts have proposed creating regulatory bodies for legalized use – the Bureau of Marijuana Regulation and the Cannabis Control Board, respectively.

"The legalization efforts in Colorado and Washington state bring us closer to a tipping point with regard to marijuana prohibition," Sam Kamin, Reuters author and professor at the University of Denver's Sturm College of Law, said in a statement. "The groups that have been working for years to legalize marijuana will be taking the issue to more and more states in 2014 and beyond."

It was unclear how many shops were raided, or how much marijuana was seized.

“We asked what we were doing wrong,” Casey Lee, an employee of one of the raided dispensaries told the TV station. “We thought we were complying with every law and everything, and [the DEA] said it’s federally illegal.”

“As states have legalized marijuana for recreational use, there are still barriers that users may face in understanding the law,” Michael Carlson, reference attorney at Reuters, said in a statement. “Marijuana is still considered an illegal drug in the eyes of the federal government and people can be prosecuted if they are caught with marijuana on federal grounds, such as national parks, even though it may be legal in that state.”

Ten states have made no action regarding marijuana according to Reuters. Only one, Idaho, has specifically passed legislation reaffirming their stand against its legalization.