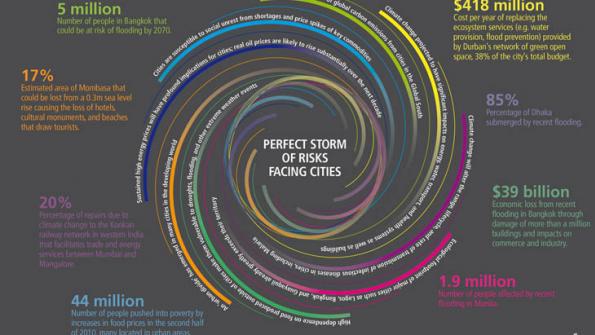 As cities grow, action must be taken to ensure a more sustainable future.

Cities take up 2 percent of the earth’s surface, but they account for 60 to 80 percent of energy consumption and 75 percent of carbon emissions. More than half of the world’s population lives in cities, and that number is expected to grow to 75 percent by 2050. Anticipating that unprecedented growth, city planners are looking to "future proof" cities to provide for a more sustainable future.

“Future proofing” refers to the way cities respond to the risks associated with climate change, resource scarcities and damage to ecosystems as an urban space develops. In a report released called "Future Proofing Cities", UK-based Atkins Global, an engineering and design consultancy, analyzed risk profiles for 129 cities in 20 countries around the world. The report found there is a closing window in which to act before cities are locked into unsustainable practices – often exacerbated by a “grow first, tackle environmental risks later” mentality.

The three main risk factors facing cities are climate risks, carbon emissions and energy use issues, and resource scarcity/ecosystem risks. According to the report, these three categories are not independent of one another, and often problems in one category are compounded by factors from another.

The report identified four types of at-risk cities and offered solutions for each. They are:

City policymakers are often able to respond to these concerns more nimbly than national counterparts, according to the report. Local governments can act with precision, creating solutions that work best in their location. Often these solutions not only benefit the environment, but have positive social and economic outcomes.

Atkins presented their report Sept. 9 in San Diego as part of a panel discussion focusing on the city’s future sustainability. Mark Kersey, San Diego councilman said, “Regardless of their size or location, cities need to act now to future-proof their urban development and infrastructure strategies before getting locked into unsustainable development pathways,” in a statement.

For more information, or to download the report, visit futureproofingcities.com