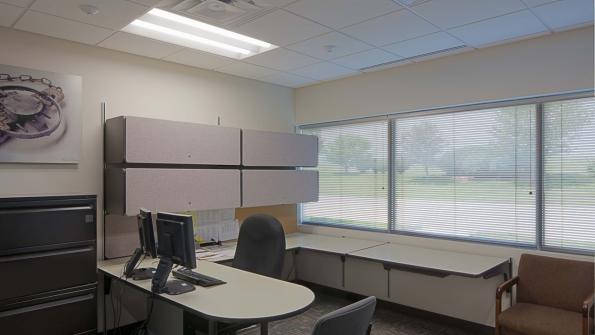 The Iowa Public Employees' Retirement System (IPERS), a public pension fund for employees of state and local governments headquartered in Des Moines, Iowa, has occupied its current headquarters for more than a decade. But the time had come for an upgrade. In the face of growing energy challenges, IPERS had two choices: upgrade the 43,000-square-foot building or find new space.

IPERS property manager Suzan Stuchel met with the team at Bellevue, Neb.-based Key Professional Engineers, Inc. (KPE) to determine the best strategies to reach its goals. KPE is a consulting engineering firm. The overarching goal was for the IPERS building to become net-zero-energy-ready by reducing the electric load on the facility.

After an assessment of its options, IPERS embarked on a $4.4 million modernization and renovation project that addressed an entire office redesign, new HVAC systems and a comprehensive lighting system upgrade.

Existing T8 fluorescents were upgraded to Lithonia Lighting RT Series LED fixtures with embedded nLight controls technology in the offices and conference room areas. IPERS also chose to use daylighting in the areas that have windows and dimming applications in some other areas.

“We decided to specify Acuity Brands products because of the indoor ambient LED lighting option,” said Brad Lauritsen of KPE. His firm performed an energy audit of the facility. “The RT Series luminaire from Lithonia Lighting neatly integrates with nLight technology to create a total lighting and controls solution from a single supplier.”

Even before the project was complete, IPERS saw a $12,000 reduction in costs associated with energy over the same three-month period from the previous year. With help from Acuity Brands solutions, IPERS reduced its electrical load by 70 percent. This installation will help meet both their short-term energy-savings goals, as well as position IPERS to achieve its long-term goal of operating as a net-zero energy building.

In addition to specifying RT Series LED luminaires, IPERS incorporated Peerless lighting solutions from the Acuity Brands portfolio to create a modern look and feel in the conference rooms (shown in photo).

For governments and other organizations, “one of the advantages of working with Acuity Brands is we can provide a smart and simple lighting and controls solutions for any space,” said Dave Ranieri, vice president and general manager of the Indoor Business Unit of Acuity Brands. “As industry leaders in integrated lighting and controls solutions, we were able to provide IPERS with the right technology to meet their short- and long-term goals.”

IPERS employees have also noticed a change with the sensors, specifically with people who work overtime. “It used to be too bright in our offices, and now everyone likes the light levels. The lights look great, and they work well with the aesthetics of our building,” said Susan Stuchel, IPERS property manager.