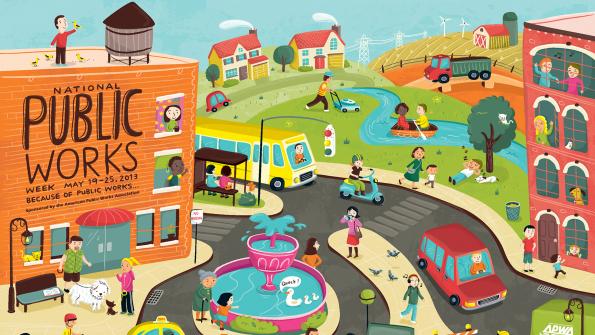 National Public Works Week (NPWW) starts Sunday May 19 and runs through Saturday, May 25. The American Public Works Association (APWA), based in Kansas City, Mo., sponsors this annual celebration. During NPWW, the APWA works to raise awareness of the contributions of public works professionals and the crucial role that infrastructure, facilities and services play in the quality of life in communities.

Since 1960, APWA has sponsored National Public Works Week across North America, where more than 28,000 public works professionals in the U.S. and Canada remind the public of the contributions public works makes to their daily lives. Public works professionals’ responsibilities include planning, building, managing and operating the public infrastructure in local communities and ensuring a sustainable quality of life.

“APWA is pleased to honor the men and women who are key to the sustainability of our communities,” said APWA’s Executive Director Peter B. King. “National Public Works Week is about honoring the enormous contribution that public works professionals make in serving our communities by providing and maintaining our transportation, water systems, utilities, emergency response operations and other essential infrastructure and services,” King said. “In both the U.S. and Canada, the National Public Works Week celebrations and events are marked by resolutions and proclamations by governors, provincial premiers, mayors, and other city and county officials.”

The American Public Works Association is a not-for-profit, international organization of more than 28,000 members involved in the field of public works. APWA serves its members by promoting professional excellence and public awareness through education, advocacy and the exchange of knowledge. APWA has an office in Washington, D.C., along with 63 chapters across North America

Also of interest to public works personnel everywhere: American City & County is accepting nominations for the 2013 Public Works Leader of the Year. Go here for the entry form.

Nominees for the award are judged on major accomplishments, the reasons those accomplishments/projects were important to the community, and when the projects involved were completed. The winner will be profiled in the August issue of American City & County.

Public works officials in any local government in the United States are eligible to be nominated. Those include (but are not limited to): Director of Public Works and heads of the related operations, such as roads and bridges, streets and highways, parks and recreation, solid waste, water, wastewater and fleets. There are no restrictions on who can submit a nomination for 2013 Public Works Leader of the Year. The deadline to submit nominations is Monday, June 3.

John Sullivan of the Quincy, Mass., Department of Public Works talks about how the city of Quincy will celebrate National Public Works Week in this video.