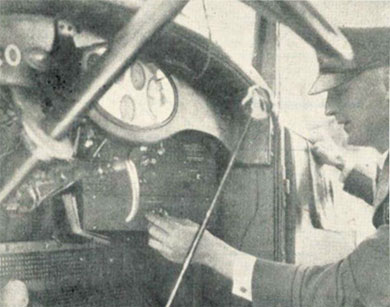 Constructed by Hentz & Kaugman of San Francisco and installed in the dashes of officers’ personal vehicles, the radio sets consisted of two parts, the in-dash audible signal unit and an external receiving set, which was checked out at shift open and returned to the precinct at shift close.

If a culprit dared pull a caper in Berkeley, the desk sergeant on duty was at the ready, translating the emergency call to code and alerting officers via the airwaves. The codes, audible from 100 feet, transmitted successfully from “as far as 60 miles” from broadcast headquarters (a fireproof room in City Hall).

With this innovation, officers learned of crimes-in-progress within minutes of the emergency call, thus “greatly increasing the chances of finding the culprit.”

Overall cost of such an innovative system? $4,000. Not a bad deal for Berkeley (unless, of course, you were a bad guy).

Things were also looking a bit brighter in Burlington, Iowa, where the Burlington High School and Junior College paid $2,700 to electrically illuminate the football field. According to the installation’s designers, General Electric Company, Burlington was the first preparatory institution to embrace the now standard “Friday Night Lights” concept.