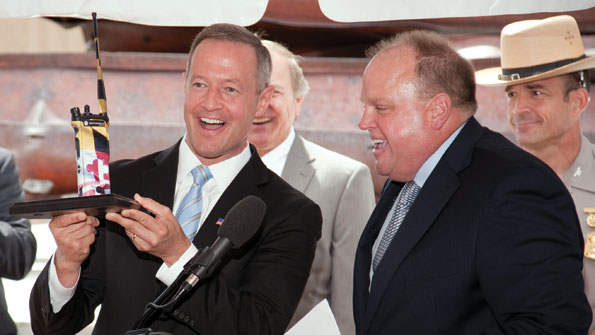 To improve homeland security in Maryland, Gov. Martin O'Malley and other state officials created a list of 12 core capacities they believed all of its regions should possess. Topping that list is interoperable communications. The state now has accomplished that goal with the launch of the Maryland First Responders Interoperable Radio System (Maryland FiRST).

Maryland faced two challenges that made a new radio system necessary. First was the need to provide a secured communications network for state and local police, fire, emergency medical technicians and emergency management agencies to communicate with each other. The second was to meet a Federal Communications Commission (FCC) order that requires land-mobile radio operators to narrowband their systems to 12.5 kHz or less.

In June, Gov. O'Malley made the first call on Maryland FiRST, which was designed and installed by Motorola Solutions, at a ceremony at Baltimore's Inner Harbor. The new system will be constructed in five phases. The first phase provides connections along Maryland's I-95 corridor where about one-third of the state's population and two-thirds of its critical infrastructure are located, including Baltimore-Washington International Airport and the Port of Baltimore. It also will cover the Chesapeake Bay Bridge and Kent County. The first phase will be fully operational by the end of this year with the remaining phases completed by 2016. Maryland FiRST will provide users with 95 percent coverage. The statewide wireless infrastructure will satisfy the FCC's narrowband order and enable communications among state, county and city agencies for day-to-day operations and during emergencies and disasters, which can overload and disrupt landlines and cell phone networks. And, Kent County will save $5 million by joining Maryland FiRST instead of reconfiguring its current radio system.

"Our first responders deserve modern communications equipment to perform their jobs in the safest and most effective way possible," says Gov. O'Malley."