Even Superman has a weakness

We all know that every fictional superhero has one debilitating weakness. Do any of the following fatal flaws apply to you?

When a government scandal hits the news, we all shake our heads in disbelief. Why would that buyer circumvent the rules? How shameful that a purchasing director would award a contract to his buddy! But were these individuals evil-doers or were they your average, hard-working individuals who gave in to a weakness? 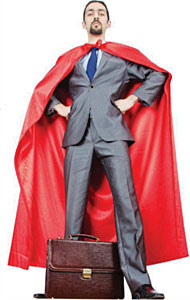 We all know that every fictional superhero has one debilitating weakness. Could it be we are all good guys who, if we give in to our one fatal flaw, might end up doing something professionally unethical? If Superman can be stopped in his tracks by a little Kryptonite, could you make a bad decision when confronted with your weakness? Do any of the following fatal flaws apply to you?

Captain Oblivious walks into the office and immediately stumbles over a large box of paper on the floor. He goes about his day with his cape tucked into the back of his pants. Everyone at the office loves Captain Oblivious because he is so at ease with himself and allows life’s little problems to just roll off his back. Unfortunately, Captain Oblivious’ relaxed manner is also his fatal flaw. He is the definition of complacent, just going through the motions, pushing paper and never really focusing on his job. Although he doesn’t mean to do anything unethical, he just does not pay attention to the details. When a scope of work for a new solicitation hits his desk, he doesn’t take the time to read it carefully. He skims it and misses the fact that the scope of work appears to be written by the current contractor who provides the service. The scope is so restrictive that no other vendor has a chance of competing fairly for the work. Captain Oblivious publishes the solicitation “as is” and receives a protest. The agency is accused of playing favorites because they published restrictive specifications that preclude open and fair competition, and Captain Oblivious can only shrug his shoulders as to why.

Know It All Man is a certified genius. His extensive training and education have made him the authority on everything related to procurement. When something new or different pops up on his desk, he does not think twice about it. “I don’t need to look up the rules or ask others for input. I can figure this out on my own,” he says. Sure, Know It All Man has never published a design-build solicitation before, but he vaguely remembers the state statute that applies. The customer department is relying on Know It All Man’s expertise when it comes to issuing and awarding this solicitation. They are shocked to discover that the process did not have the correct committee member composition, or that they evaluated pricing before they were legally allowed to. Know It All Man is too proud to admit that, even with all his knowledge, there may be occasion to consult the laws, regulations and procedures to ensure he is doing everything correctly.

Invisible Gal is as stealthy as a ninja and can fly under any radar. However, sometimes the power gets to her head. When Invisible Gal is in a rush, she is tempted to cut corners. She has been known to process a change order without getting all the necessary approvals. Invisible Gal feels pressured to get her work processed quickly and to be recognized as a hard worker. Her powers keep her hidden, and she assumes no one will know that she skipped a few steps. Besides, she reasons, “This one tiny act isn’t a big deal in the long run.” Invisible Gal does not realize that the Super Audit Team is on the scene reviewing files. How will Invisible Gal explain the missing documentation when Super Audit Team inevitably tracks her down? She may be invisible, but her actions leave a vapor trail of destruction behind her.

Do any of these superheroes sound familiar to you? In their hearts they want to believe they are doing their job in a manner that provides best value for the goods and services purchased by the agency, preserves the public trust, and protects the public interest. But by giving in to their weaknesses and not thinking through the consequences of their unethical actions, they become the bad guys in their own agencies.

We have all had days when we find it difficult to concentrate on the details, to say no to a superior, to ask the probing questions, to ask for help, or to be the one who puts an important project on hold because there is missing information. But being a true superhero means you have to ensure your conduct is always ethical and stand up for the values and guiding principles of the public procurement profession. Doing so instills public trust and will keep you and your agency on the side of truth and justice!

Ruth Estrada, CPPB is a Senior Contract Officer for the City of Tucson, Ariz. This article is based on the winning essay in the 2012 NIGP Ethics Essay Contest.