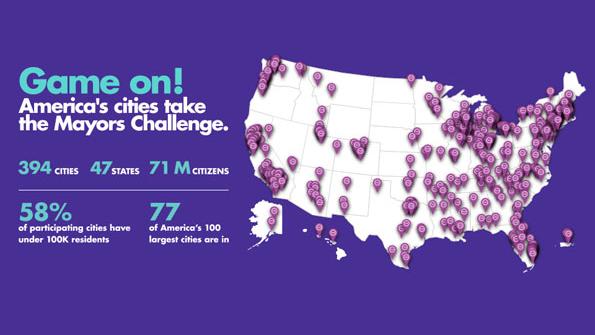 Almost 400 mayors enter the competition for ideas to help cities

A competition to generate ideas to solve problems and improve life in American cities has attracted entrants from 394 cities across the country. The Mayors Challenge, an initiative of Bloomberg Philanthropies, offers participating mayors the chance to compete for a total of $9 million in prizes for their cities.

“There’s been a tremendous response to the Mayors Challenge,” said New York City Mayor and billionaire Michael Bloomberg, the namesake for Bloomberg Philanthropies. The foundation announced that cities participating in the challenge, issued earlier this summer, encompass 47 states and over 71 million Americans.

Participants include 77 of America’s 100 largest cities, while 58 percent of participating cities have fewer than 100,000 residents. Cities participating include Atlanta, Chicago, Miami and Seattle, as well as Asheville, N.C., Fort Wayne, Ind., Mesa, Ariz., and Newton, Mass.

Participating mayors must submit their ideas by September 14 for a chance to win a grand prize of $5 million or one of four $1 million prizes. The winning ideas must solve a major social or economic issue, improve customer service for citizens or businesses, increase government efficiency, and/or enhance accountability, transparency and public engagement. The goal is to develop successful ideas that can be replicated in other cities.

Twenty finalists will be announced this fall. Teams from each of those cities will attend Bloomberg Ideas Camp, a two-day gathering in New York City where the teams will work together to improve one another’s ideas.

The five winning cities will be announced next spring. Winners will be selected based on several factors, including their idea’s novelty, impact and potential for replication.