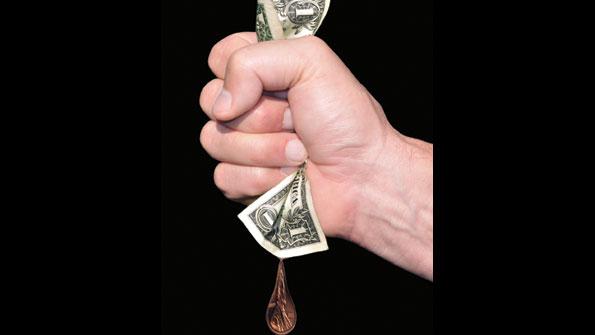 Just about everyone at one time or another has felt squeezed — between home and work, aging parents and young children, your bills and your paycheck. Now, another kind of squeeze is affecting local governments across the country.

State aid and property taxes, which together account for more than half of local revenues, are dropping simultaneously for the first time since 1980, according to “The Local Squeeze,” a report by the Pew Center on the States. State aid to local governments fell by $12.6 billion, or 2.6 percent, in fiscal year 2010 from 2009, the most recent year for which comparative data are available. Property taxes — the other side of the squeeze — were $11.9 billion, or 2.5 percent, lower in 2010 than the year before, the largest decline in decades.

Local governments are feeling the crunch. “Localities have had to find ways to balance their budgets with these revenue challenges,” says Bob Zahradnik, research director with the Pew American Cities Project. “We’ve seen impacts across a variety of service areas, including public safety, welfare and social services, even basic services like trash collection.”

That is what happened in the small town of Belvidere, N.J., where officials faced a projected deficit of more than $250,000. This year, the town opted to cut garbage collection entirely. Residents now have to haul their own trash to the landfill or pay for private service.

Other cities and counties facing the squeeze have had to cut critical jobs. In Cleveland, after the state cut $36 million in aid in 2011, the city laid off more than 300 employees, more than half of them police officers and firefighters. It also shut down five fire companies.

The property tax squeeze, too, hit hard. Stockton, Calif., where the housing boom in the Silicon Valley tripled construction rates, saw its property tax revenues plummet during the Great Recession. In 2011, Stockton had the second highest foreclosure rate in the nation, just below Las Vegas. In June, Stockton became the largest U.S. city ever to file for bankruptcy. Local school districts have suffered the most from the squeeze. Half of the more than 500,000 local government jobs lost since 2008 have been in education, Zahradnik says.

Are there any bright spots amidst the gloom and doom? Maybe, Zahradnik says, there’s hope in the “innovations and efficiencies that this crisis is generating.”

In Anaheim, Calif., for example, officials contracted out some services, including park maintenance and collection of delinquent taxes, to the private sector. Dallas turned over operation of its zoo to a nonprofit group. And Beaverton, Ore., began using more efficient hydraulic dump trucks that reduced the number of sanitation workers needed.

“City leaders are on the frontline of a lot of these issues,” Zahradnik says. “Oftentimes, they can come up with practical solutions to some of these problems.”

Still, he says, local leaders are likely to face more challenges. Many states are still cutting aid to local governments, and property taxes are expected to decrease further in 2012 and 2013. “More tough choices are ahead.”