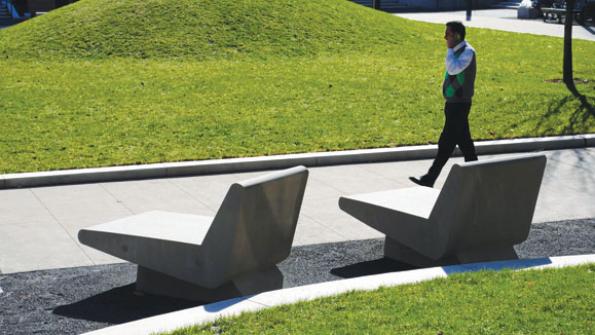 Cleveland opened a redesigned park last fall that has a greener, more inviting atmosphere than its original concrete environment. Named for former Mayor Ralph Perk, the park was established in 1972 as part of an urban renewal project designed by modernist architect I. M. Pei. Local designers crafted the one-acre space in the middle of the central business district with an ensemble of heavy concrete planters surrounding a sunken plaza, and it quickly became a gathering place for vagrants and pigeons.

The idea to redevelop Perk Park first emerged in 2003 as a way to enliven the surrounding neighborhood. New York-based Thomas Balsley Associates and locally based McKnight Associates designed a new plan that would turn the sunken park into a level lawn with seating, unique lighting and awnings. Because of political and financial delays, the redevelopment plans did not move ahead until 2009, when the city council committed $1.6 million to the project. ParkWorks, a local non-profit group, assembled private donations, bringing the total budget to $3 million.

Opened in November 2011, the new Perk Park features shade trees and modified versions of planted mounds preserved from the old design, complemented by a wide, open lawn. Custom furniture by Balsley — chaise lounge chairs, high cafe tables with swivel stools, and cafe lounge chairs — and perimeter garden beds offer seating for visitors, who gather to enjoy lunch from food trucks and nearby restaurants. A geometric grid of 20-foot-tall light wands decorate and provide lighting for the park, and red awnings cover sidewalks and seating on one side.