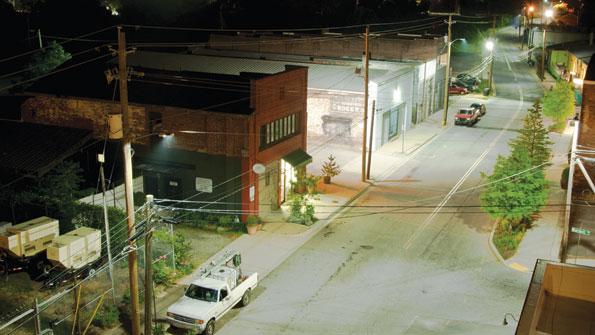 Large-scale cooperative project to cut energy use, save millions

Asheville, N.C., started a four-year project last year to replace all 9,000 of its streetlights with LED fixtures. The project aims to reduce the city’s energy use and carbon emissions as well as save millions of dollars that will be used for additional energy-saving projects.

In 2008, Asheville created an Office of Sustainability to manage the city’s efforts to reduce carbon emissions. Around the same time, the city’s regional investor-owned utility, Progress Energy Carolinas, which owns and maintains all of the city’s streetlights, was investigating options for upgrading its aging fixtures. The utility and the city worked out a new agreement under which the city would purchase new LED streetlights, the utility would install them on existing poles, and the city would pay the utility a reduced rate for the lights’ operation and maintenance.

To start the project, Asheville dedicated $270,000 in Energy Efficiency and Conservation Block Grants to purchase LEDway streetlights equipped with BetaLED Technology from Durham, N.C.-based Cree. The utility replaced 730 mercury vapor and high-pressure sodium fixtures in the city’s River District and Kenilworth neighborhoods with the new LED lights. By June 2011, the first phase of the project was complete, and the city began saving approximately $45,000 in annual energy costs from those fixtures.

The city council approved the issuance of $3.8 million in bonds to finance the rest of the LED replacement project. Nearly 3,000 more LEDway streetlights will be installed by June, completing the second phase. The city anticipates saving a total of $260,000 annually from the LEDway streetlights and will use those savings for other energy efficiency initiatives in the city. A third phase will begin this summer, followed by a final phase.

Each retrofitted LED streetlight saves an average of $71 in energy costs per year, so the city expects replacement of all 9,000 fixtures will save an average of $638,000 per year. Additionally, the completed project will help the city move closer toward its goal of reducing its carbon footprint by 80 percent by 2050.