With the 50th anniversary of the historic flight of Friendship 7 just around the corner on Feb. 20, now is a good time to look at the MPA program at the John Glenn School of Public Affairs at Ohio State University. Read below about an exciting Friendship 7 tribute that takes place on Feb. 20 and benefits the Glenn School. 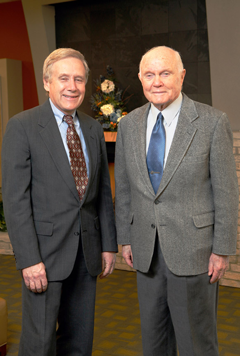 With the 50th anniversary of the historic flight of Friendship 7 just around the corner on Feb. 20, now is a good time to look at the MPA program at the John Glenn School of Public Affairs at Ohio State University. Read below about an exciting Friendship 7 tribute that takes place on Feb. 20 and benefits the Glenn School.

Charles Wise, director of the Glenn School in Columbus, Ohio, offered his views on the school’s MPA degree program and other course offerings. The school has about 230 graduate students and 187 undergraduate students.

Govpro: What sets the Glenn School apart from other MPA degree programs?

Charles Wise: Just like in real estate, the location of a public affairs university is everything. The Glenn School is unique among most public affairs institutions because we are located at one the nation’s most esteemed research universities and in a state’s capital city.

These two things allow our students to tap into The Ohio State University’s vast resources and to collaborate with other Ohio State colleges and departments while providing access to Ohio’s state and local government agencies. This gives our students the opportunity to combine research and practical public policy applications in a real-world setting.

With over 2,500 Glenn School alumni working in leadership positions in all areas of the public and nonprofit sectors, internships and assistantships are available that allow MPA students to work at every level of government and with a wide range of nonprofit organizations as they study. In the past year, students at the Glenn School have worked with a number of Columbus organizations, including United Way of Central Ohio, the Ohio Department of Education, Franklin County Government, and the Ohio Board of Elections among many others.

Glenn School students are able to specialize by taking electives, pursuing a dual degree program, or completing a graduate minor. The Glenn School partners with a number of other departments at Ohio State to provide students the opportunity to learn from leading experts in other departments, including Social Work, Business, Public Health, City and Regional Planning, Law, Slavic and East European Studies, and others.

CW: The Glenn School involves students in research opportunities and projects involving other areas of the Glenn School, including the Battelle Center for Science & Technology Policy and the Glenn School Centers in Washington, D.C., and Kiev, Ukraine.

Govpro: What are the school’s goals and objectives?

CW: The Glenn School’s overarching mission is to “inspire citizenship and develop leadership” by preparing professionals for public service, challenging students and the public to be more involved in the civic life of their community and by providing applied research that directly benefits the public. Our students graduate with skills and tools to thrive as tomorrow’s public sector leaders.

The field of public affairs is dynamic and vibrant, marked by research, analysis and practice in a politically charged environment under public scrutiny with competing demands, and the John Glenn School of Public Affairs is training tomorrow’s public service professionals to thrive and provide leadership in the public and nonprofit sectors.

On Feb. 20, 1962, Col. John Glenn entered his Mercury capsule, Friendship 7, and emerged a national hero. Launched from atop an Atlas rocket that had a 1 in 5 failure rate, Glenn flew his capsule around Earth three times in under 5 hours before splashing down in the Atlantic Ocean, becoming the first American to orbit Earth. This may have been Glenn’s first brush with history, but it would not be his last.

The Ohio State University is celebrating John Glenn’s legacy on the 50th anniversary of his historic flight aboard Friendship 7 with a gala dinner on Feb. 20, 2012. The event will honor John Glenn and his legacy of leadership, citizenship and public service. One of the speakers at the event will be Captain Mark Kelly, commander of space shuttle Endeavor’s final mission. The dinner and program start at 7 p.m. This site has more information on the program. Tickets can be purchased by contacting this address:

Proceeds from the celebration dinner will benefit faculty, students and programs related to science and technology research and policy at the John Glenn School of Public Affairs and the College of Engineering at The Ohio State University.