The U.S. Conference of Mayors (USCM) and The Scotts Miracle-Gro Co. have announced the recipients of the 2012 GRO1000 Gardens and Green Spaces Grant Awards Program. The grants, which focus on improving U.S. cities through the development of community gardens and green spaces, were announced at USCM’s 80th Winter Meeting in Washington. 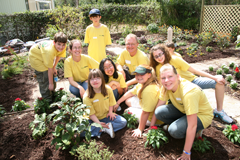 The U.S. Conference of Mayors (USCM) and The Scotts Miracle-Gro Co. (SMG) have announced the recipients of the 2012 GRO1000 Gardens and Green Spaces Grant Awards Program. The grants, which focus on improving U.S. cities through the development of community gardens and green spaces, were announced at USCM’s 80th Winter Meeting in Washington.

This year’s winning cities are:

“Over the last several years, the Conference has pushed for cities to develop community gardens to enhance the health and quality of life in our neighborhoods,” said USCM president Los Angeles Mayor Antonio Villaraigosa. “This new Grant Awards Program shines an important spotlight on mayoral efforts to support innovative gardens and green spaces.”

The grants support cities’ efforts to create innovative public gardens and green spaces, and recognize mayoral stewardship in the development of urban greenscapes. “The importance that a garden can have in a community is irrefutable,” said SMG CEO Jim Hagedorn. “We were inspired by the innovative ways that mayors across America are using gardens and green spaces to improve their cities. From fostering urban revitalization to developing edible gardens for citizens, the winners of these grants truly demonstrate the power that gardens can have in a community. We are proud to provide support for these efforts and look forward to helping each of these cities bring their projects to life.”

The winning cities were selected by a panel of former mayors and national garden experts from a pool of more than 80 applicants. Grants, in the amount of $25,000 from Scotts Miracle-Gro, were awarded to the five cities.

Upton Edible Garden is a new mayoral initiative to create community vegetable gardens that will serve as educational sites where residents can learn about growing and cooking healthy food.

I-126/Greystone Boulevard Interchange Beautification Project will enhance the green space entrance way into the Riverbanks Zoo and Garden, one of the primary gateways into Columbia.

The Quesada Gardens Initiative is an expansion project to create a new gardening education area and public gathering space with the potential for food swapping, distribution and vending.

The U.S. Conference of Mayors is a nonpartisan organization of cities with populations of 30,000 or more. There are 1,210 such cities in the country, and the cities’ chief elected official, the mayor, represents each city in the conference.