Kiosk Group, Inc. has modified its collection of iPad kiosks to comply with new ADA requirements that take effect this March. 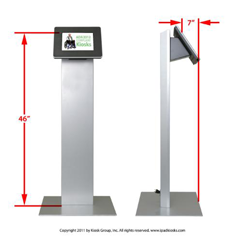 The firm offers four models of its designer iPad kiosks: the Standalone kiosk, the Standard and Low-Rise Countertop kiosks and the elegant Wall kiosk. Go here to view models.

“The new regulations lower the maximum reach for height from 54 to 48 inches. That’s not very high,” Schweickart says. “The average American adult is 67.5 inches tall. We calculated the correct screen angle to work the best for all heights — six-footers to wheelchair-bound users. We’re very happy with the results.”

The new regulations were signed into law by the Department of Justice in 2010. Makers of kiosks and other architectural specialties were given two years to comply. On March 15, 2012, federal law will require the new standards.

“The new ADA standards are going to have a far-reaching effect on every part of American life, including kiosks. Penalties can be as much as $55,000 for the first offense and actually double on subsequent offenses,” says Kiosk Group president Mike James. “Our engineering team has been working hard this past year to develop kiosk solutions that will serve all Americans, not just most of them. In fact, we’ve been selling our 2012-compliant kiosks since this past summer.”

The Americans with Disabilities Act is a civil rights law that gives all Americans equal access to employment, local government facilities, public transportation, public accommodations, telecommunications, and other major life activities. The law is intended to keep people with disabilities in the mainstream of America life.

James told Govpro that he is advising government facility managers to be aware of requirements in Section 508of the Workforce Investment Act, which requires that federal agencies’ electronic and information technology be accessible to people with disabilities, including employees and members of the public.

“Government facility managers need to be concerned about section 508 requirements that go above and beyond the new ADA requirements,” James says. Section 508, James says, pertains to accessibility for the visually and hearing-impaired.

James says his firm’s kiosks have a variety of applications in government facilities. “For instance, any kind of museum installation would have a need for our product,” he says. “We are installing payment systems with our kiosks in state and local government installations to pay bills, taxes, fines and other transactions.”

Kiosk Group’s models are applicable in municipal utilities, including water departments that are operated by governments, James says. “A customer arrives at the utility office, swipes his or her card and pays the bill,” he says.

James says the market is expanding for his firm’s products. “We’ve seen tremendous interest in iPad kiosks. They are flying out the door. It’s hard to keep up with production.”

The unit’s affordable price may be a factor, James says. “It seems that the iPad kiosks are bringing in a whole new interest level from people who ordinarily would not want to do kiosks because of the costs of traditional kiosks. Traditional models cost in the thousands of dollars, but you can get an iPad kiosk for less, and it’s fully ready to go, so it’s opened up a whole new set of customers.”

James has blogged about the specific guidelines that drove the redesign of his firm’s products. His paper on the topic is available here.