New York cats get a paw up (with related video)

Winter in New York City can get pretty chilly, even for a cat. 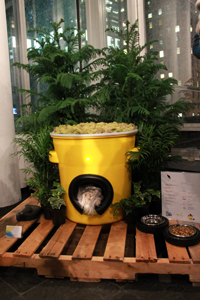 Winter in New York City can get pretty chilly, even for a cat. In December, the Architects for Animals hosted the second annual Giving Shelter, a winter cat shelter design exhibition benefiting the Mayor’s Alliance for NYC’s Animals.

Designers from New York-based firms created shelters ranging from a red, shag-covered dwelling to modernist, stacked cubes. The winning design, created by Brooklyn-based Co Adaptive Architecture and Kathryn Walton, a designer and founder of The American Street Cat, also includes a data monitoring device. When a cat enters, the shelter sends information to a base station, and the cat’s weight and length of stay are posted to the web, which can be used by Trap-Neuter-Return workers.

All of the shelters, as well as money raised from the event, are being donated to the NYC Feral Cat Initiative, a project of the Mayor’s Alliance for NYC’s Animals, and then given to feral cat caretakers. In a city known for its architecture, it’s nice that the cats aren’t being left out in the cold.

To learn more about the event and see previously designed shelters, view the video below.