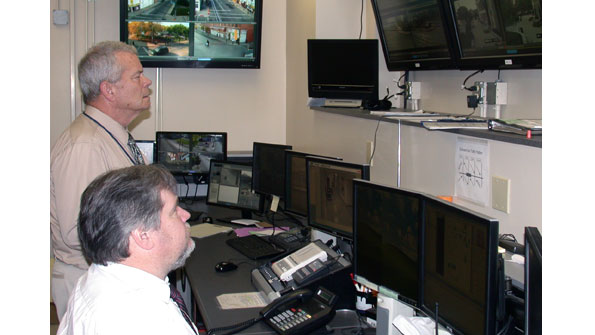 Before the security improvement project began in the mid-1990s, Columbus had separate surveillance systems, servers and building controllers at city hall, municipal court, the police department, public utilities and other major facilities. Some facilities had on-site security staff, but some buildings were not monitored at all, and others had duplicate staff or multiple third-party alarm monitor service companies.

The $500,000 command center, completed in 2010, is staffed continuously by between 15 and 20 security personnel, and includes monitoring equipment that connects to surveillance cameras in other facilities over an IP-based network. When a security alarm is triggered, the incident automatically displays on a workstation monitor for review.

So far, the command center network includes the municipal court building, parks and recreation, health, building development, public services and fleet maintenance. The system continues to grow as the city appropriates funds for the remaining buildings. The fire department training campus and an administration building are scheduled for completion this year.